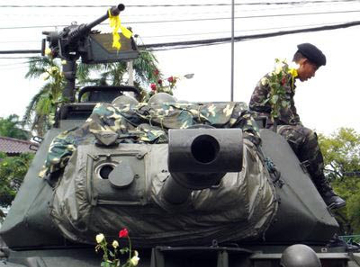 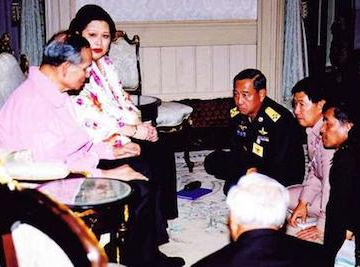 We have just heard that there has been a military coup against the government in Bangkok, led by army chief Sonthi Boonyaratglin. The army has taken control of Government House and is also controlling all TV stations. The coup appears to be an act of support for the King by the army, which thankfully suggests that it will be non-violent.

Thaksin Shinawatra was able to broadcast a brief message on Channel 9, declaring a state of emergency, before the army took over the signal. However, as he is currently at the UN in New York, Thaksin's influence in Thailand is now practically non-existent.

Thailand has a long history of military coups, though the last one was more than a decade ago and there had been progress towards a stable democracy. Yet another coup is the last thing Thailand needs, though an army spokesman has appeared on TV to assure us that they will return power to a democratic government as soon as possible.
Categories: politics, Thailand, Thaksin Shinawatra
continued...