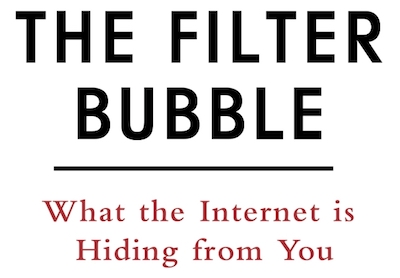 The Filter Bubble, by Eli Pariser, was first published in 2011, though its central thesis has regained currency in the current debate surrounding fake news and political polarisation. Pariser describes how online personalisation algorithms "create a unique universe of information for each of us - what I've come to call a filter bubble - which fundamentally alters the way we encounter ideas and information."

He argues that the 'filter bubble' acts to reinforce our ideological positions by presenting us only with opinions with which we already agree, and that this process is invisible and involuntary: "When you turn on Fox News or read The Nation, you're making a decision about what kind of filter to use to make sense of the world. It's an active process, and like putting on a pair of tinted glasses, you can guess how the editors' leaning shapes your perception. You don't make the same kind of choice with personalized filters."

The 'filter bubble' is not a new concept, though it was popularised by Pariser's book. It's related to the notion of 'cyberbalkanization' coined twenty years ago, and Tim Berners-Lee has criticised the 'walled garden' effect of closed systems such as app stores that fragment the web.

The impact of the bubble can be seen in Thailand: red-shirts and yellow-shirts each have different sources of information (Voice TV and Manager, respectively). Similarly, CNN's Reliable Sources contrasted Democrat and Republican media (respectively, MSNBC and Fox News), calling it "Red News/Blue News".

The Filter Bubble is subtitled What The Internet Is Hiding From You. For the US paperback edition, the subtitle was changed to How The New Personalized Web Is Changing What We Read & How We Think.
Categories: book reviews, media
continued...