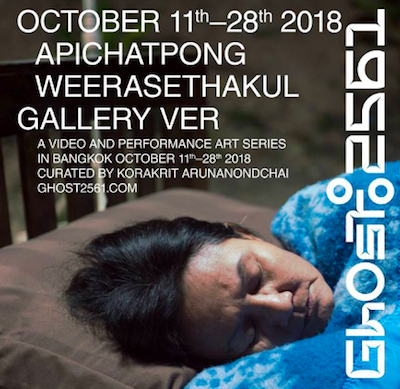 Ghost:2561, a series of video screenings at galleries throughout Bangkok, began yesterday and runs until 28th October. (2561 in the Buddhist calendar equates to 2018 in the Gregorian calendar.) The event includes Blue (ตะวันดับ), a new video by Apichatpong Weerasethakul, in which his muse, Jenjira Pongpas, falls asleep in front of a series of theatrical backdrops. As Jenjira sleeps, a flame appears, and gradually the entire scene becomes engulfed in a blazing fire.

The liminality between sleeping, dreaming, and wakefulness is a recurrent theme in Apichatpong's work. He filmed his boyfriend asleep on three consecutive nights for Teem, and Dilbar shows a construction worker sleeping. Sleep is also central to Apichatpong's most recent feature film, Cemetery of Splendour (รักที่ขอนแก่น), and his segment of the new portmanteau film Ten Years Thailand (Song of the City). The fire in Blue has echoes of his Primitive installation project, such as the burning football in Phantoms of Nabua.

Blue, showing at Bangkok's Gallery VER, is projected onto a large glass screen, hanging in the centre of the darkened gallery. This produces reflections of the images on the walls and floor, highlighting the film's theatricality and demonstrating Apichatpong's continued fascination with (and mastery of) the effects of light.
Categories: Apichatpong Weerasethakul, art exhibitions, Thailand
continued...