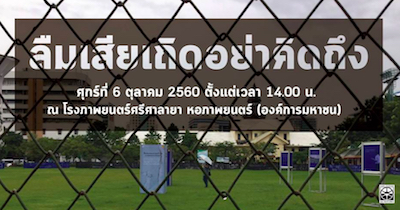 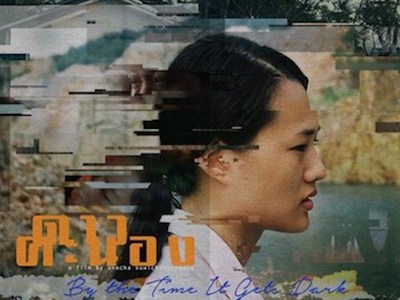 On 6th October 1976, at least forty-six people, most of whom were students, were killed in a military massacre at Thammasat University in Bangkok. The massacre remains one of the most shocking moments in Thailand's modern history, though it's also part of a cycle of military violence, with similarly brutal suppressions of pro-democracy protesters in 1973 (also at Thammasat), 1992 (Black May), and 2010.

The Thammasat students had been protesting against the return from exile of Thanom Kittikachorn, who was Prime Minister and Deputy Prime Minister during an extended period of military rule (another familiar cycle) from 1957 to 1973. On 25th September 1976, two anti-Thanom activists (Choomporn Thummai and Vichai Kasripongsa) were hanged by the police, and on 4th October 1976 a group of Thammasat students staged a reenactment of the event. One of the students who posed as a hanging victim bore a resemblance to Crown Prince Vajiralongkorn (who is now King Maha Vajiralongkorn), and on its front page on 6th October 1976, the Dao Siam (ดาวสยาม) newspaper printed his photograph and accused the students of hanging the Prince in effigy.

Military-owned radio stations demonised the students as Communists who should be killed, and militia groups (the Village Scouts, Nawaphon, and Red Gaurs) joined the police and army in storming Thammasat. A photograph by Neal Ulevich, of a man ready to hit a corpse hanging from a tree with a folding chair, has come to symbolise the extreme violence and prejudice of the massacre. (The photograph was reprinted in Moments, on page 113.)

Manit Sriwanichpoom exhibited blood-red photographs of the victims at Flashback '76. Thunska Pansittivorakul's documentary The Terrorists (ผู้ก่อการร้าย) included archive footage of the massacre. Thunska's most recent documentary, Homogeneous, Empty Time (สุญกาล), highlights the violence inflicted by the militia groups, in contrast to the heroic portrayal of the Village Scouts in anti-Communist propaganda films such as Sombat Methanee's หนักแผ่นดิน. Ulevich's photograph was appropriated by Manit—for Horror in Pink (ปีศาจสีชมพู)—and Kosit Juntaratip (Allergic Realities), and was recreated in Samanrat Kanjanavanit's banned film Shakespeare Must Die (เชคสเปียร์ต้องตาย).

Today, the Thai Film Archive in Salaya will commemorate the anniversary of the massacre with an event titled ลืมเสียเถิดอย่าคิดถึง. Four films that address the tragedy will be screened: They Will Never Forget, directed by Ooka Ryoochi; พีเจ้น ('pigeon'), by Pasit Promnampol; The Two Brothers (สองพี่น้อง), by Patporn Phoothong and Teerawat Rujenatham; and By the Time It Gets Dark (ดาวคะนอง), by Anocha Suwichakornpong. (A similar event, 41 ปี 6 ตุลา ปกป้องประชาธิปไตยประชาชน, is taking place simultaneously at Thammasat.)

They Will Never Forget is a compilation of 8mm news footage. พีเจ้น is a student film inspired by the aftermath of the massacre. The Two Brothers is a short documentary about the two men whose hangings were reenacted by Thammasat students; Patporn interviewed relatives of massacre victims for his earlier documentary Respectfully Yours (ด้วยความนับถือ). By the Time It Gets Dark uses actors to recreate scenes from the massacre; it was shown with Respectfully Yours earlier this year in Chiang Mai.

(The Two Brothers is part of a project to document the massacre, and features the controversial Dao Siam front page. A photo of the newspaper was censored in Prachuap Amphasawet's book พลิกแผ่นดิ: นประวัติการเมืองไทย 24 มิย 2475 ถึง14 ตค 2516, and Somsak Jeamteerasakul wrote a chapter about it in ประวัติศาสตร์ที่เพิ่งสร้าง, though it has rarely, if ever, been reproduced.)
Categories: 6th October, film screenings, politics, Thailand
continued...