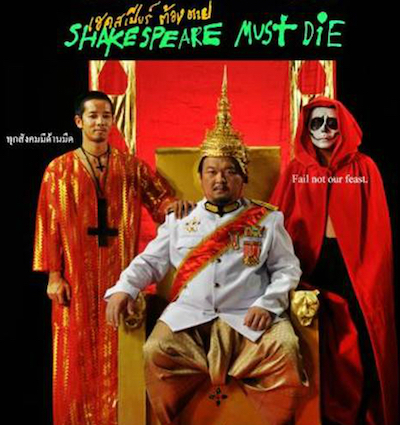 Ing K's film Shakespeare Must Die has been banned by the Thai Film Censorship Board. The film was refused a certificate yesterday, on the specious grounds that it may create division within society. (The Thai Ministry of Culture has long been obsessed with maintaining the out-dated notion of social harmony, when in reality Thai society is deeply polarised between reds and yellows.)

The film, inspired by Macbeth, was produced by the photographer Manit Sriwanichpoom; Ing and Manit run the Kathmandu gallery in Bangkok. Presumably the story of Macbeth, which includes violent regicide, was too much for the Censorship Board. The film also references the 1976 Thammasat massacre, one of the most politically sensitive moments in modern Thai history (an event which also features in Manit's Flashback '76 and Horror In Pink, and Thunska Pansittivorakul's film The Terrorists).

Shakespeare Must Die is not Ing K's first banned film. Her cult film My Teacher Eats Biscuits was also banned, and its screening at the inaugural Bangkok International Film Festival was halted by the police. Public screenings of Apichatpong Weerasethakul's Syndromes & A Century (heavily cut in 2007), Tanwarin Sukkhapisit's Insects In The Backyard (banned in 2010), and Thunska's This Area Is Under Quarantine (banned in 2009) have also been cancelled due to state censorship.
Categories: censorship, Thailand
continued...