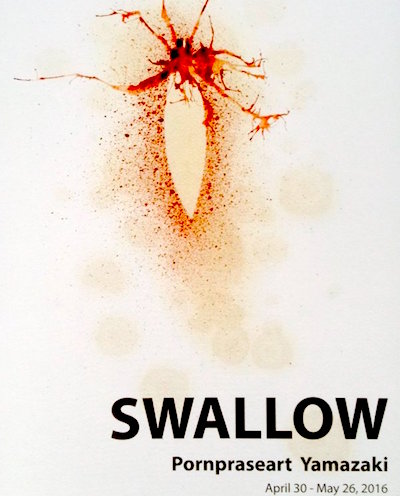 Swallow, an exhibition by Thai artist Pornprasert Yamazaki, opened yesterday in Bangkok. The exhibition includes fifteen works painted in blood and petrol, including several depictions of insects and other natural subjects. (The paintings have single-word titles: Spider, Butterly, Dragonfly, and Fly date from 2015; the others are from this year.)

Swallow is showing at La Lanta until 26th May. One of Pornprasert's previous solo exhibitions, Suicide Mind, also featured works painted in blood, and the group exhibition Currency Crisis included another of his blood paintings. (For Swallow, the artist has used an alternative English spelling of his name: Pornpraseart Yamazaki.)