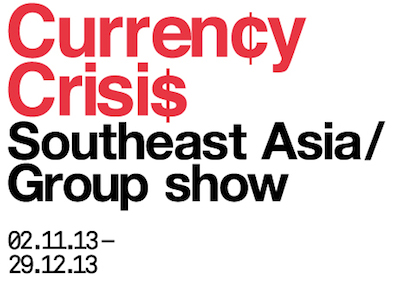 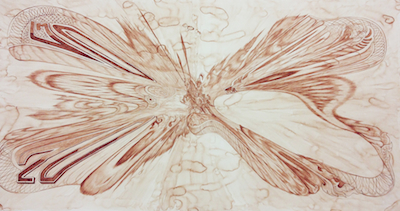 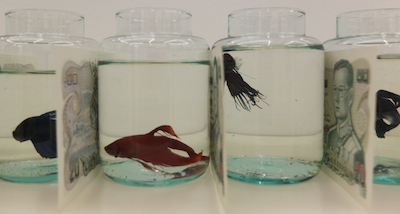 Currency Crisis, a group exhibition featuring interpretations on the theme of money, opened today at Whitespace Gallery's new venue in Bangkok. (Whitespace relocated from Siam to Silom earlier this year.) Each of the participating artists, from Thailand and elsewhere in South-East Asia, subverts money in some way, both physically and symbolically, either by drawing on banknotes, reducing them to powder, or sawing coins in half. The exhibition, a comment on the global economic crash and the commodification of contemporary art, will close on 29th December.

The show includes a new painting by Pornprasert Yamazaki, a distorted portrait of King Taksin, titled Butterfly. Beneath the picture is an installation of fighting fish in a row of fifty individual jars, separated by crisp twenty-baht banknotes. Butterfly represents the fish's eye-view of Taksin as depicted on the banknotes, refracted through the jars. Like the works from his solo exhibition Suicide Mind, Butterfly was painted using Pornprasert's own blood.