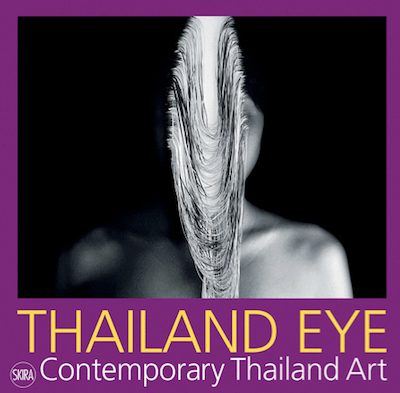 Thailand Eye: Contemporary Thailand Art is (at least, according to its sponsor, Prudential) "the first and most comprehensive publication on the Thai contemporary art scene." Steven Pettifor might disagree: his Flavours (2003) was a turn-of-the-century guide to contemporary Thai art.

Thailand Eye may not be the first publication on contemporary Thai art, though it is the most comprehensive, at almost 400 pages. While Flavours profiled only twenty-three artists, Thailand Eye features seventy-five. Thailand Eye is primarily a visual resource, with little analysis or criticism, though it has a detailed appendix listing the previous exhibitions of each artist. In contrast, Flavours has no such lists, though it includes double-page essays on each artist.

The artists profiled in Thailand Eye include Araya Rasdjarmrearnsook (images from her video The Class, which was shown at Crossover and Dialogues), Anupong Chantorn (his painting Perceptless and other works painted on saffron robes), Manit Sriwanichpoom (This Bloodless War, his consumerist parodies of Vietnam War photographs), Prasert Yodkaew (his installation Angel), Thunska Pansittivorakul (stills from his films Middle-Earth, KI SS, This Area Is Under Quarantine, Reincarnate, Supernatural, and The Terrorists), and Kosit Juntaratip.

Of the seventy-five artists, twenty-four were selected for a Thailand Eye exhibition at the Saatchi Gallery in London last year. (The exhibition will be shown at BACC in Bangkok from 18th March to 7th August.) The exhibition was curated by Serenella Ciclitira (editor of Thailand Eye and other books in the Eye series on Asian contemporary art), Nigel Hurst (director of the Saatchi Gallery) and Apinan Poshyananda (Permanent Secretary for Culture), though the twenty-four artists were ultimately approved by the Ministry of Culture as the exhibition is part of the Ministry's Totally Thai project.

As a result, some of the more provocative artists in Thailand Eye were not selected for the exhibition. Thunska Pansittivorakul's film This Area Is Under Quarantine, for example, is banned in Thailand, so it had little chance of being included. Likewise, Montri Toemsombat's granite carving Bangkok Art & Coup Centre (a pun on the Bangkok Art & Culture Centre) would presumably have irritated both BACC and the NCPO.

Kosit Juntaratip is the most interesting of the twenty-four selected artists, and the book is a rare opportunity to see photographs of his performances in which he painted with blood flowing from a vein in his arm. Sakarin Krue-On, whose installations were featured in Imply Reply, is also included. Apinan Poshyananda has curated many previous exhibitions, notably Traces Of Siamese Smile (whose 300-page catalogue acts as another broad survey of current Thai art).
Categories: art exhibitions, book reviews, Thailand, Thunska Pansittivorakul
continued...