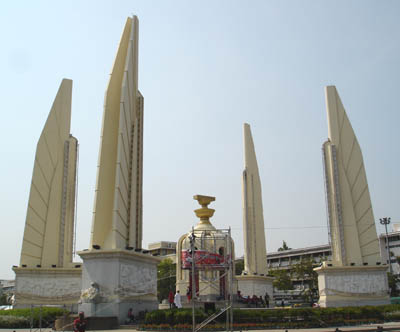 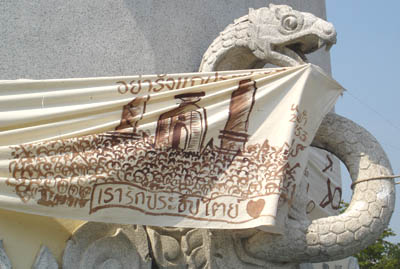 UDD protesters in Bangkok have painted pro-democracy images and slogans in blood, and wrapped the paintings around the city's Democracy Monument. At a UDD rally last week, thousands of UDD supporters donated 10cc of blood each, which was then symbolically poured onto the ground outside Government House and other political sites in Bangkok. (Government House was illegally occupied by the PAD in 2008.)

The current UDD campaign was launched after last month's seizure of Thaksin Shinawatra's assets by the Supreme Court. The protesters are also opposed to the 2007 constitution (drafted by the military), the 2006 coup (allegedly organised by the Privy Council), and the governing coalition (formed by the military following the dissolution of TRT and the PPP). Unlike the riots last year, the current UDD demonstrations are peaceful, despite scaremongering by Deputy PM Suthep Thaugsuban.