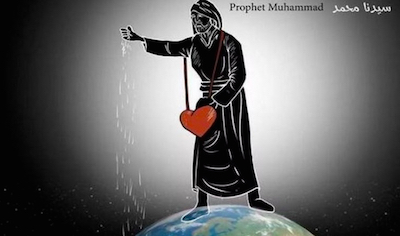 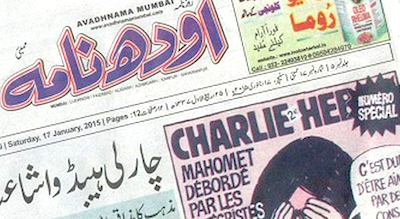 Palestinian President Mahmoud Abbas has ordered an investigation into the newspaper الحياة الجديدة, after it published a drawing of Mohammed. The cartoon, by Mohammed Saba'aneh, was printed on Sunday. Mohammed is depicted sowing seeds, a metaphor for peace, and the cartoon is perhaps the first modern drawing of Mohammed by a Muslim artist.

In a similar case, the Iranian newspaper Mardom-e Emrooz was closed down last month, after it used the slogan "Je suis Charlie" as a headline. Also, the editor of the Indian newspaper Avadhnama, Shirin Dalvi, was arrested on 28th January, after her newspaper printed Charlie Hebdo's 2006 Mohammed cover on its front page on 17th January. She wrote a front-page apology the following day, though the newspaper was closed down on 19th January.

French newspaper Charlie Hebdo's depictions of Mohammed made global headlines recently, after many of its staff were killed by Islamic terrorists. In 2006, Charlie Hebdo published a cartoon of Mohammed complaining that he is "loved by idiots". Its offices were firebombed in 2011, after it published a Charia Hebdo issue guest-edited by Mohammed. In 2012, it printed a caricature of Mohammed naked. In 2013, it produced a comic-strip biography of Mohammed (part 1, part 2), with an expanded edition in 2014. Last year, it depicted Mohammed being beheaded by an Islamic State terrorist.
Categories: blasphemy, censorship, media
continued...