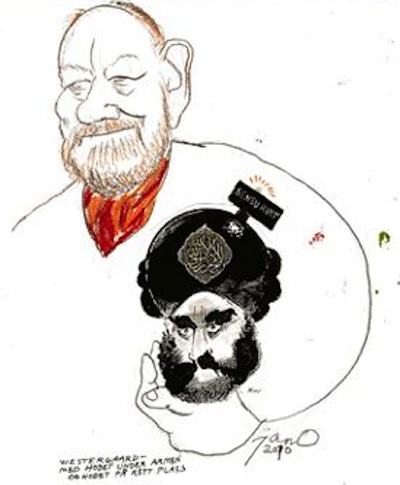 At the start of this month, the editor of Adresseavisen, Denmark's oldest newspaper, pulped an issue of its Uke-Adressa supplement before it was distributed. The issue included a drawing by Jan O Henriksen depicting Kurt Westergaard and his infamous Mohammed caricature.

This is not the first time that Henriksen has caused controversy by drawing Mohammed. In 2008, Adresseavisen published his cartoon of Mohammed as a naked suicide-bomber. That image was one of many Mohammed cartoons published in response to the protests surrounding another Danish newspaper, Jyllands-Posten, which printed twelve Mohammed cartoons in 2005.
Categories: blasphemy, censorship, media
continued...