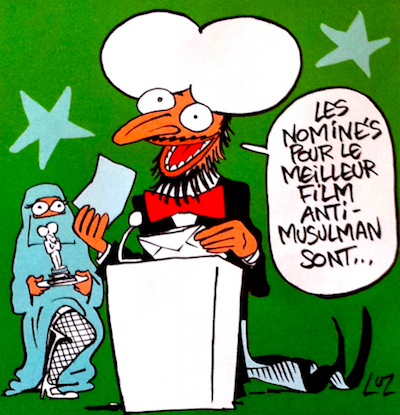 Charlie Hebdo, the satirical French newspaper, has again published provocative cartoons of Mohammed. The newspaper's current issue features a back-page caricature of Mohammed naked with a video camera, and a cartoon of Mohammed at an awards ceremony; both caricatures were drawn by Renald Luzier, known as Luz.

The cartoons are a commentary on the recent film clip Innocence Of Muslims. That film has led to anti-American protests outside numerous American embassies, and over thirty people have been killed as a result. Anticipating similar reactions to Charlie Hebdo's cartoons, several French embassies have announced that they will close on Friday as a precaution.

Equally provocative drawings of Mohammed as a dog were exhibited in 2007. The short film Fitna also includes a Mohammed cartoon, and there was an Everybody Draw Mohammed Day! event in 2010.
Categories: blasphemy, censorship, media
continued...