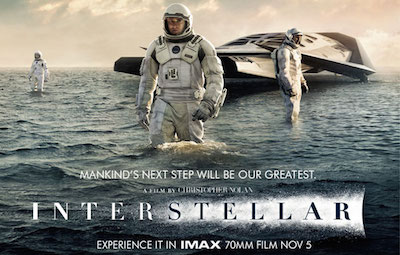 Christopher Nolan's Interstellar stars Matthew McConaughey as a former NASA pilot who turns to subsistence farming as life on Earth becomes increasingly unsustainable. Michael Caine (who also appeared in Batman Begins and its sequels, The Prestige, and Inception) sends McConaughey and other astronauts (including Anne Hathaway, who played Catwoman in The Dark Knight Rises) through a wormhole in search of a habitable planet. The cast also includes (shh!) Matt Damon in a cameo role.

As in Nolan's previous films, practical special effects (such as gimbals) are prioritised over CGI. For the first time since his directorial debut, Nolan worked without cinematographer Wally Pfister, collaborating instead with Hoyte van Hoytema (who previously photographed the more modest Let The Right One In and Tinker Tailor Soldier Spy). The result is an ambitious and spectacular film that should be seen on the largest screen possible.

Interstellar is heavily influenced by Stanley Kubrick's 2001: A Space Odyssey. In both films (and others such as Contact and Prometheus), an alien signal inspires a mission into deep space. Interstellar's black hole is as out-there as 2001's 'stargate', and both films feature artificial environments designed for inter-dimensional acclimatisation. Interstellar's rotating Endeavor spaceship was surely inspired by 2001's Space Station V (itself based on a design by Wernher von Braun). Hans Zimmer's score occasionally references Also Sprach Zarathustra, which was popularised by 2001.

Nolan is sometimes compared to Kubrick, as both directors are famous for maintaining secrecy around their work and for their perfectionist approach to cinema exhibition. They're both also associated with emotionally detached films, and the uncharacteristic sentimentality in Interstellar is its main weakness. As in the climaxes of Contact and AI, there's too much corn, and not just from McConaughey's cornfield. A father's love for his children was an understandable character motivation in Inception, though Interstellar presents it as part of a scientific explanation of cosmic events.

In a Hollywood of lowest common denominator franchises, reboots, and remakes, Nolan stands out as a director of original and intelligent blockbusters. Interstellar is a science-fiction film, though it's informed by research into complex theoretical physics. Similarly, Memento and Inception were challenging films that demanded concentration from their viewers. However, as the black hole approaches in Interstellar, the film abandons its connections to logical science, and it becomes impossible to suspend disbelief. As in AI, it feels as if a mawkish and implausible coda has been tacked onto an otherwise coherent science-fiction adventure.

It also stretches credibility that McConaughey would be invited to lead an interstellar mission immediately after arriving at NASA unannounced, and Caine's line "I can't tell you any more unless you agree to pilot this craft" is best forgotten. Equally unbelievably, McConaughey leaves his family the very next day to begin the mission. Then, as the spaceship approaches a wormhole, another astronaut has to draw him a diagram to explain how a wormhole works. These clunky moments, and the final act's shift from sci-fi into sentimental fantasy, ultimately make Interstellar less satisfying than Inception or Memento.

Nolan shot half an hour of footage for The Dark Knight with a 70mm IMAX camera, and its sequel The Dark Knight Rises contained an hour of IMAX. Interstellar features even more IMAX footage, and is being released in 70mm at selected IMAX cinemas; these prints have an aspect ratio alternating between 1.43:1 (for the IMAX footage) and 2.4:1 (for the anamorphic sequences). The film does indeed look incredible when presented in 70mm IMAX, which has the highest picture quality and largest screen size of any cinema projection system.

Interstellar is also being released in a variety of other formats, all of which crop the IMAX footage to varying degrees. At digital IMAX cinemas, the aspect ratio will alternate between 1.9:1 and 2.4:1. There are also 70mm prints, screening at 2.2:1; and 35mm, DCP, and 4DX releases, at 2.4:1. It's a sign of Nolan's passion for film over digital (shared by Quentin Tarantino, and articulated in the documentary Side By Side), and of his close relationship with the studio, that celluloid prints have been struck in addition to the DCP version.

The distinction between 70mm IMAX and digital IMAX is significant, as digital IMAX uses smaller screens than 70mm IMAX and has a lower picture resolution. Digital IMAX and IMAX DMR are inferior to native 70mm IMAX, though IMAX cinemas are increasingly converting to digital and 70mm IMAX is in (terminal) decline. In Thailand, there are currently five IMAX-branded cinemas, though only the Krungsri IMAX at Siam Paragon (in Bangkok) has the capacity for original 70mm on a full-sized screen.
Categories: film reviews
continued...