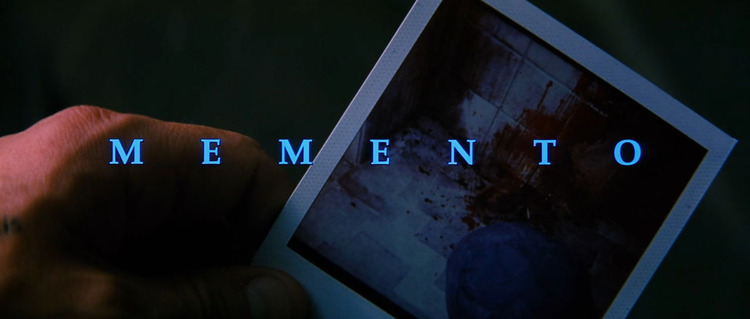 Memento is a psychological thriller directed by Christopher Nolan, starring Guy Pearce, Carrie-Anne Moss, and Joe Pantoliano. It's an example of neo-noir filmmaking, featuring the detective-mystery plot, duplicitous characters, flawed protagonist, femme fatale, and downbeat conclusion typical of film noir. More specifically, Memento is an example of film soleil, a strain of noir (exemplified by Chinatown) that exchanges chiaroscuro for sunshine and swaps the grime of New York for the cleanliness of California.

Leonard Shelby (Pearce) and his wife were attacked in their home by two masked men. During the attack, Shelby killed one of the men, though he sustained a head injury that resulted in anterograde amnesia: he can remember his life before the attack, though he has lost his short-term memory. Consequently, he photographs everyone he meets, writes notes to himself, and even tattoos important information on his body. The film begins with Leonard searching for his wife's murderer, a man whose initials are JG. He is helped by an amoral cop, Teddy (Pantoliano); and he meets a bartender, Natalie (Moss), who gives him vital information. Teddy and Natalie both exploit Leonard to a certain degree, as does the only other person he interacts with, a motel clerk.

Leonard exists in a constant state of confusion, unable to remember anything for more than a few minutes, and the film employs a unique narrative structure in order to give the audience the same sense of bewilderment. The story is essentially told in reverse chronological order, with each event followed by the event that chronologically preceded it. Throughout the film, Leonard tracks down clues that lead him to JG, and each new clue is initially a mystery to the audience: we learn of the significance of each event only when its context is revealed by the subsequent scene. (The technique was later used by Gaspar Noe in Irreversible.)

Memento's narrative positions it alongside the non-linear, fragmented structures of Eternal Sunshine Of The Spotless Mind and other recent films, a trend inspired by the success of Pulp Fiction. With a complex series of clues, an unreliable narrator, and a twist ending, it also recalls The Usual Suspects. The film demands an audience's attention, since every scene contains a new piece of the puzzle; it's one of the smartest and most original films of the decade.
Categories: film reviews
continued...