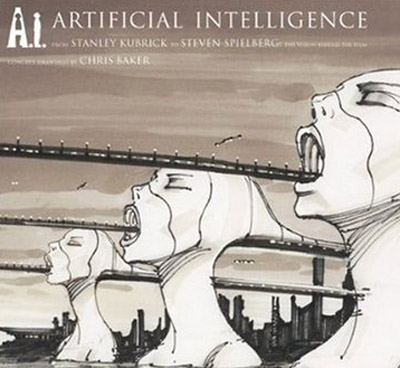 Artificial Intelligence - From Stanley Kubrick To Steven Spielberg: The Vision Behind The Film, edited by Jan Harlan and Jane M Struthers, is a portfolio of pre-production material from Spielberg's film AI: Artificial Intelligence. It includes several pages from Kubrick's notebooks, though the bulk of the book is devoted to large reproductions of concept art by Chris Baker.

AI was originally conceived by Kubrick, who worked with Brian Aldiss on a treatment and screenplay based on Super-Toys Last All Summer Long, a short story by Aldiss. Kubrick subsequently collaborated with Bob Shaw, Ian Watson, and Sara Maitland on revised versions of the script, and production was scheduled to start in 1999 after the completion of Kubrick's Eyes Wide Shut.

After Kubrick's death during post-production of Eyes Wide Shut, Spielberg took over the project and wrote a new screenplay based on Kubrick's notes. The film, directed by Spielberg, was released in 2001. (I've always regarded AI as a misguided homage to Kubrick with a syrupy Spielbergian ending.)

The book features a foreword by Spielberg which gives a brief summary of his friendship with Kubrick. (Spielberg was more forthcoming in an interview for the Channel 5 documentary Steven & Stanley in 2001.) There is an account of AI's pre-production by Struthers, who works with the Kubrick Archive, though it glosses over Kubrick's 'creative differences' with his various script collaborators. (Frank interviews with Aldiss and Maitland are featured in the Channel 4 documentary The Last Movie from 1999.)
Categories: book reviews, Stanley Kubrick
continued...