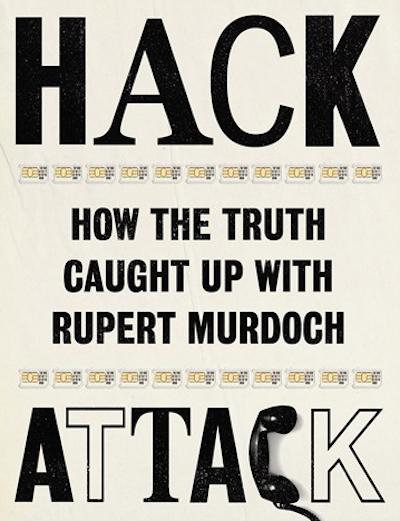 Nick Davies, an investigative journalist for The Guardian, was the first reporter to reveal that News Of The World reporters had hacked the voicemails of hundreds of public figures. The scandal led to the closure of the News Of The World, the Leveson Inquiry into press ethics, and the Old Bailey trials of former News Of The World editors Rebekah Brooks and Andy Coulson. (Brooks was cleared of all charges, though Coulson was found guilty of phone-hacking.)

Hack Attack: How The Truth Caught Up With Rupert Murdoch is Davies's comprehensive account of his investigation into the phone-hacking scandal. Davies was motivated by his distaste for the criminality of Murdoch's tabloids, as he makes clear: "inside the walls of Murdoch's castle, there was something like a mass grave full of several decades of buried secrets, so big and so stinking that once you started to dig, there really was no doubt at all about what was down there."

In addition to his chronological narrative of the hacking investigation, Davies examines the recent history of British press crimes and misdemeanours, particularly the tabloid excesses of the 1980s and early 1990s. He also summarises Murdoch's influence on British politics (such as Margaret Thatcher not referring the Times takeover to the Monopolies & Mergers Commission, Gordon Brown's "five tests" preventing Britain joining the Euro, and David Cameron socialising with Rebekah Brooks) and the abortive bid for complete ownership of BSkyB.