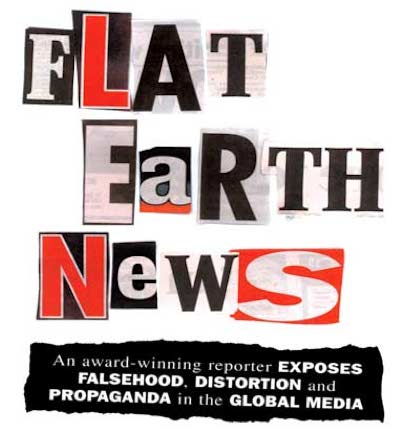 Davies criticises journalists for their reliance on wire stories and press-releases (what he calls 'churnalism'), and for never letting the facts get in the way of a good story. The Daily Mail, a reactionary UK tabloid, is one of the main targets: Davies criticises the racist scaremongering and distortion in the Mail's immigration coverage.

Newspaper sensationalism and distortion is nothing new, of course. Press baron William Randolph Hearst (the model for Charles Foster Kane in Citizen Kane) once reputedly told a photographer: "You furnish the pictures, I'll furnish the war" (a line which was paraphrased in Kane). Famously, in The Man Who Shot Liberty Valance, a fictional newspaper editor explains: "When the legend becomes fact, print the legend".

Davies was initially inspired by the news media's unquestioning acceptance of government spin regarding Iraqi weapons of mass destruction. As a pretext for war, the UK and US governments both claimed that Saddam Hussain possessed WMDs and even nuclear weapons, warning that he could deploy them against the West at any time. The BBC reported that some of these claims were inserted at the request of UK spin doctors, and after the invasion of Iraq, the WMD threat was exposed as a gross exaggeration. (Alastair Campbell wrote about his involvement with this issue in his diary, published last year; Davies claims that Campbell's criticism of the errors in the BBC's coverage was a smokescreen to cover the errors in the government's dossiers.)
Categories: book reviews, media
continued...