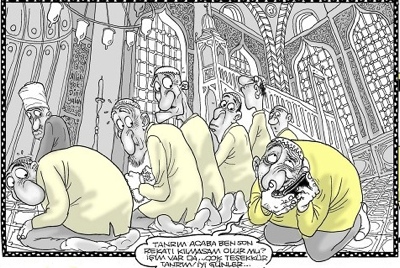 Cartoonist Bahadir Baruter is facing prosecution in Turkey after denying the existence of God in one of his cartoons. In the background of a recent cartoon, the writing on a mosque wall reads "There is no Allah; religion is a lie". The cartoon was published by the satirical magazine Penguen in February.

Other cartoonists have suffered censorship in Turkey. Two cartoonists were charged after their caricatures of President Abdullah Gul were published in Cumhuriyet, and another was fined for his caricature of PM Recep Tayyip Erdoğan as a cat in the same newspaper. Michael Dickinson faced a long legal battle relating to Best In Show and Good Boy, his collages of Erdoğan as a dog.
Categories: censorship, media
continued...