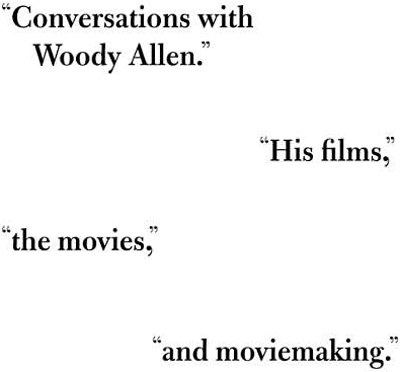 Eric Lax has interviewed Woody Allen regularly since 1971, for his book On Being Funny and an authorised biography; these interviews are collated in Conversations With Woody Allen: His Films, The Movies, & Moviemaking. It's Allen's third book-length interview, after Woody Allen On Woody Allen by Stig Bjorkman and Woody Allen: A Life In Film by Richard Schickel.

Surprisingly, Allen regards Match Point as one of his best films. More reasonably, he also rates The Purple Rose Of Cairo and Husbands & Wives very highly. He places Stardust Memories and Zelig in the second tier. He reveals that fans seem to like Broadway Danny Rose the most, and he admits that The Curse Of The Jade Scorpion may be his worst film. (No argument there.) It's clear that his priorities have changed: his personal favourites are the more substantial mid-period films rather than the "early, funny" ones (such as Love & Death and Sleeper); tellingly, he (unfairly) dismisses Scoop as "wasting my time with this little comedy". (Personally, I think his masterpieces are Annie Hall, Manhattan, and Crimes & Misdemeanors.)

Allen also reveals "my list of the best films ever made", which contains only one American film and only a single comedy:
Categories: book reviews, film lists
continued...