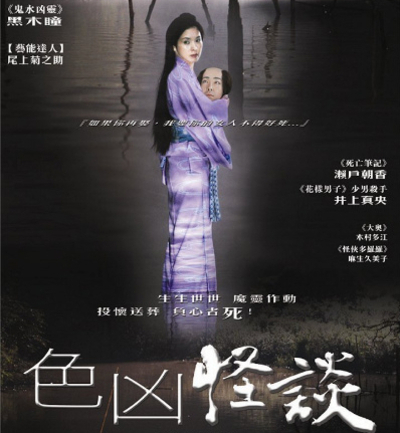 Hideo Nakata directed the J-Horror films Ringu, Ringu II (and its American version, The Ring II), and Dark Water. Ghost films were successful throughout Asia in the 1990s, with Whispering Corridors (from South Korea) and Nang Nak (from Thailand) being notable examples. Nakata's Kaidan is a return to the classical era of Japanese horror cinema, evoking 1950s ghost films such as The Ghost Of Yotsuya. Unfortunately, the slow pacing and the combination of two genres - Kaidan-Eiga (ghosts) and Ken-Geki (samurai) - result in a film that's more melodramatic than horrific, and certainly not scary. (However, I wasn't scared by Ringu either.)

For classic Japanese horror, see the films of Nobuo Nakagawa, especially Black Cat Mansion (creepy and atmospheric, except for the unconvincing ghost-cat) and Jigoku (surprisingly graphic and gruesome). Kenji Mizoguchi directed one of the first Japanese ghost films, Passion Of A Woman Teacher (now lost, like so many of Japan's silent films), and one of the very best, Ugetsu (one of Mizoguchi's masterpieces). The stylised portmanteau film Kwaidan is arguably the best introduction to Japanese horror.
Categories: film reviews