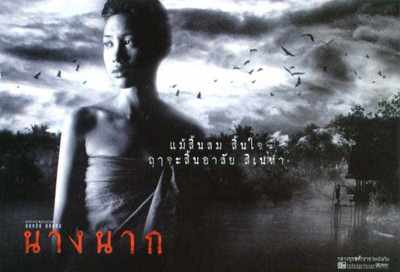 Nang Nak was a huge success in Thailand when it was originally released. Ring, from Japan, sparked the current pan-Asian horror obsession, though Nang Nak specifically launched a Thai horror revival - ever since, the most popular Thai films have been horror titles, usually with ghosts as central themes.

Nang Nak is not especially scary, though it is highly emotional. It does have some brief horrific moments, however its main purpose is to show the depth of Nak's love for her husband. The script (by Wisit Sasanatieng, who has since become a great director in his own right) has rather simplistic dialogue: much of the film is taken up by Nak repeatedly crying her husband's name, perhaps in tribute to the classic TV version of the story.

The director of Nang Nak, Nonzee Nimibutr, is practically single-handedly responsible for the international attention Thai cinema is now receiving, as director of Dang Bireley's and Young Gangsters [sic] and Nang Nak and producer of Bangkok Dangerous, Tears Of The Black Tiger, Monrak Transistor, and Last Life In The Universe. Nonzee could justifiably be called the godfather of the Thai New Wave.
Categories: film reviews, Thailand
continued...