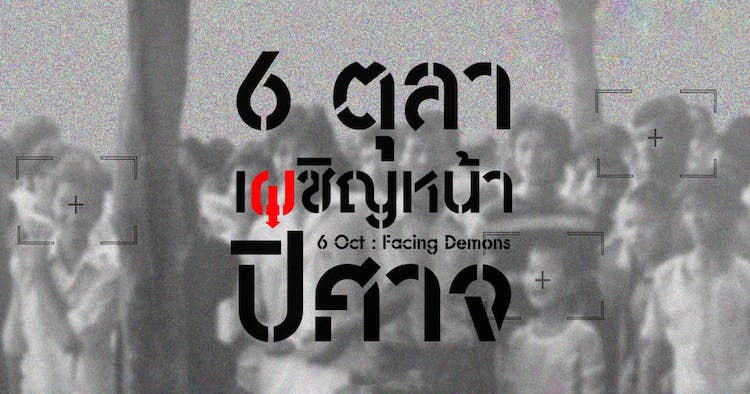 Last year, Thammasat University cancelled the annual exhibition commemorating the 6th October 1976 massacre, so the organisers created a ‘museum in a box’. This year, Thammasat’s football pitch was mysteriously fenced off on the anniversary of the massacre, and the commemoration is taking place at the Kinjai Contemporary gallery in Bangkok instead.

Kinjai’s photography exhibition 6 Oct: Facing Demons (6 ตุลา เผชิญหน้าปิศาจ) is comprised almost entirely of previously unpublished news photographs of the massacre. This is refreshing, as it expands the historical record beyond the limited set of images that usually represent the event. Thus, Neal Ulevich’s famous photograph of a hanging man—which has arguably become a cliché—is not included in 6 Oct. In its place is another powerful, award-winning image, though one that’s much less known: a Village Scout hammering a wooden stake into a dead student’s body, photographed by Preecha Karnsompot.

Also, the 6 Oct archive photographs have all been enlarged and restored. Again, this is a significant development, as images of the massacre are usually poorly-reproduced prints. (When Preecha’s photograph was published in a book by the Thai Journalists Association—๔ทศวรรษภาพข่าว/‘four decades of Thai photojournalism’—the editors lamented that the images had to be sourced from reproductions.) The enlargements reveal previously hidden elements, which become new focal points (or what Roland Barthes called ‘punctums’), hence the exhibition’s strapline: ‘the devil is in the details’. 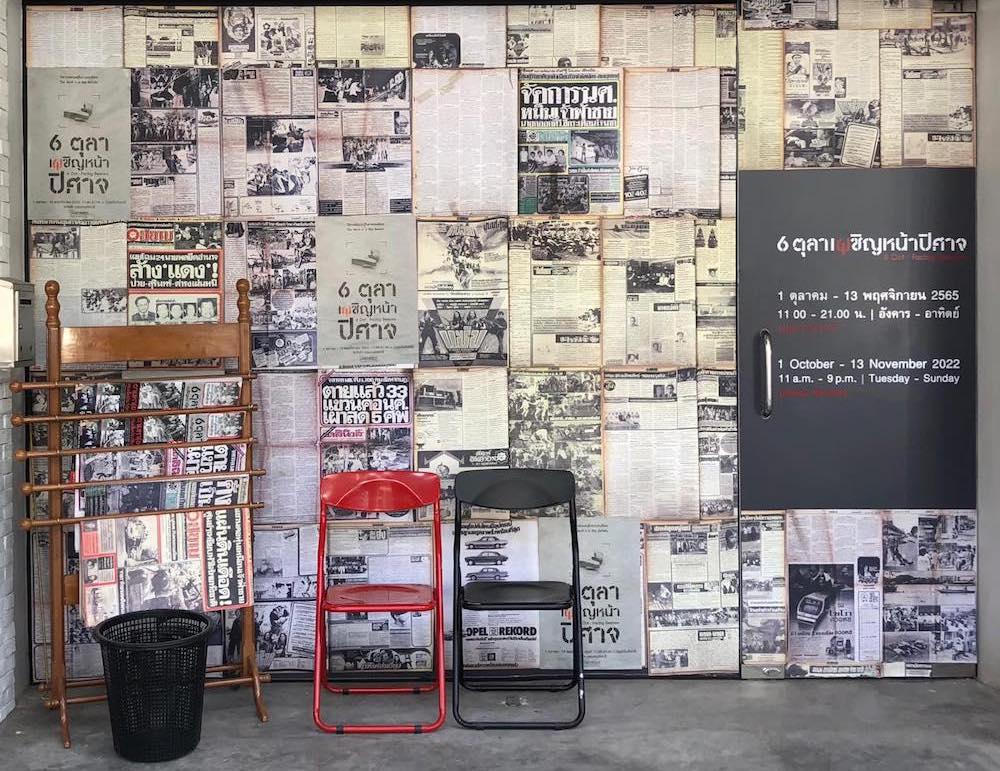 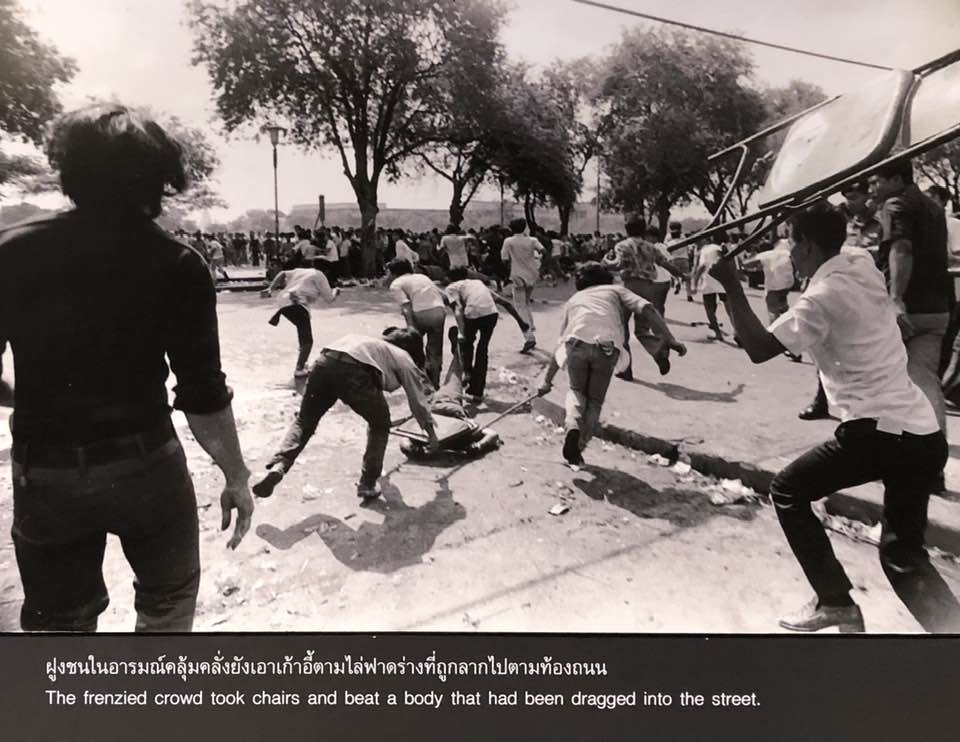 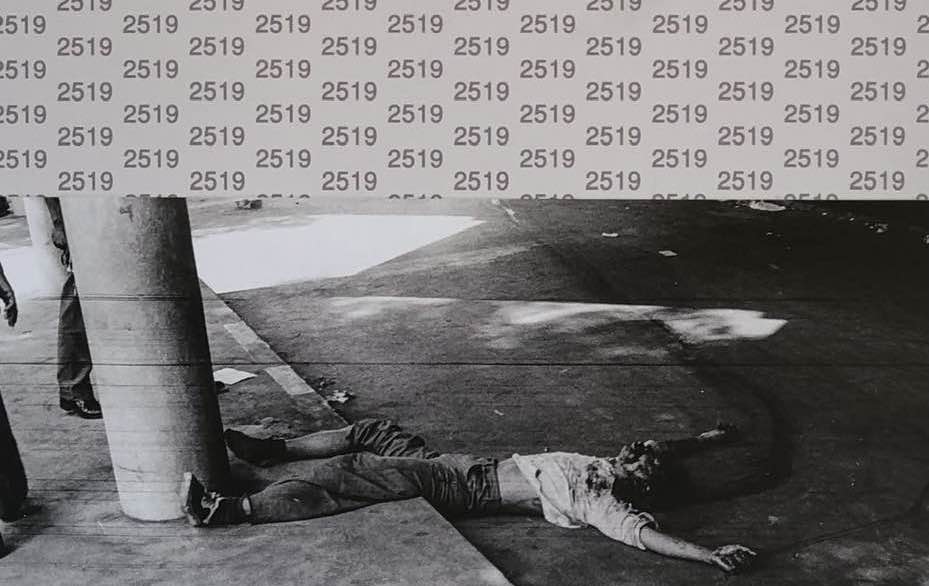 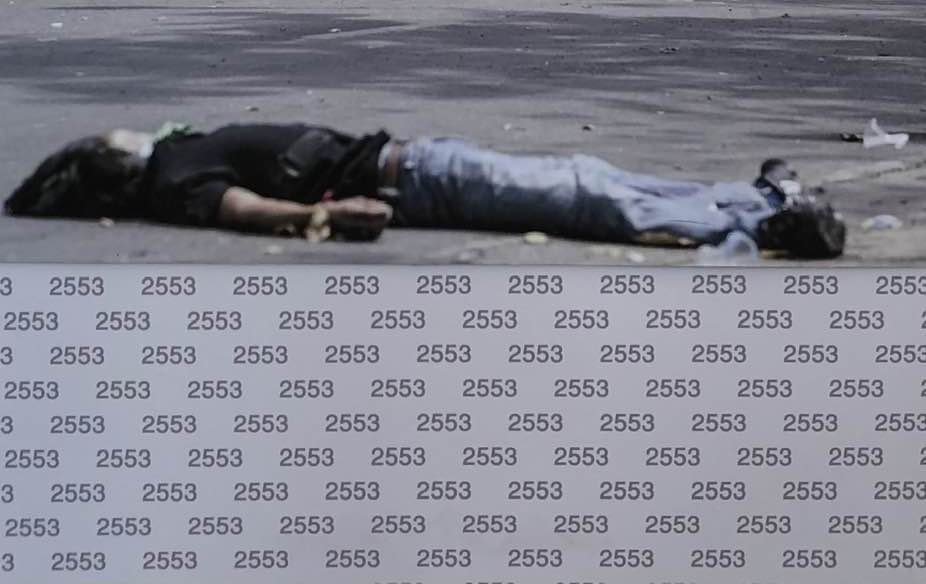 This is also an unusually provocative exhibition. A photograph of Crown Prince Vajiralongkorn (who is now King Rama X) at a Village Scout meeting is captioned “the King of Thai Politics”, implying a royal intervention. On an adjacent wall, an image of the massacre is juxtaposed with a photograph of the 2010 military crackdown, indicating that the cycle of Thai state violence continues. Also, the taboo against showing the front page of Dao Siam (ดาวสยาม) is now a thing of the past, as a reproduction of the newspaper is displayed on the street outside the gallery.

Continuing the themes of media and propaganda explored by Thasnai Sethaseree in Cold War, the exhibition brochure is designed to resemble a broadsheet newspaper. Chulayarnnon Siriphol has directed six short videos on different aspects of the exhibition, and a longer documentary titled ชวนอ่านภาพ 6 ตุลา (‘invitation to read images of 6th October’) in which Octobrists and current students interpret the photographs in the exhibition. 6 Oct opened on 1st October, and runs until 20th November (a week after the original closing date).
Categories: art, media, politics
Dateline Bangkok