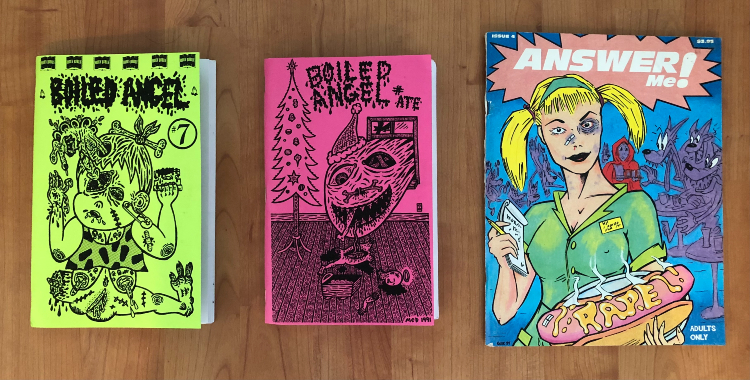 In 1994, cartoonist Mike Diana was convicted of producing and distributing obscene material, after Florida police obtained copies of his zine Boiled Angel (issues 7 and 8). Its twisted humour was certainly provocative—zine bible Factsheet Five described it as “designed to turn your stomach”—though this was precisely Diana’s intention. As he says in the excellent documentary Boiled Angels: The Trial of Mike Diana: “My goal was to make the most offensive zine ever made.”

Following the guilty verdict, Diana was denied bail. After four days in custody, he was fined $3,000 and sentenced to 1,248 hours of community service. The documentary, by horror director Frank Henenlotter, features interviews with Diana, his family, and the defence and prosecution attorneys. It’s a thorough recounting of Diana’s trial, and it also gives plenty of historical background on the Comics Code and the underground comix movement.

Diana’s case was very similar to that of Mark Laliberté, whose comic zine Headtrip (issues 1 and 2) was accused of obscenity in Canada. Laliberté and Diana had traded zines, and Laliberté’s copies of Boiled Angel were also cited in the Headtrip obscenity trial. The failure to secure a conviction in Canada perhaps made the US authorities all the more eager to prosecute Diana in Florida. (At least, that’s what Laliberté alleges in the documentary.)

Although Diana is the only artist ever convicted of obscenity in the US, there have been other prosecutions of comic art. Booksellers in New York were fined for stocking Robert Crumb’s Zap Comix (specifically the ‘family values’ parody Joe Blow in issue 4; charges against Zap’s publishers, the Print Mint, were later dropped). In a similar case in the State of Washington, booksellers were prosecuted in relation to Jim Goad’s zine Answer Me! (issue 4, with a cover illustration by Mike Diana), though they were eventually acquitted.

There have also been a handful of obscenity cases against comics in the UK. Charges against Oz magazine (issue 28) and the Nasty Tales comic (issue 1) were both related to Robert Crumb cartoons, and Crumb’s book My Troubles with Women was seized by customs in 1996. (In all three cases, the charges were eventually dropped or overturned.) David Britton was found guilty on obscenity charges relating to his novel Lord Horror and his comic Meng and Ecker (issue 1); the charge against the novel was overturned on appeal, though the conviction of the comic was upheld.
Categories: censorship, films, media
Dateline Bangkok