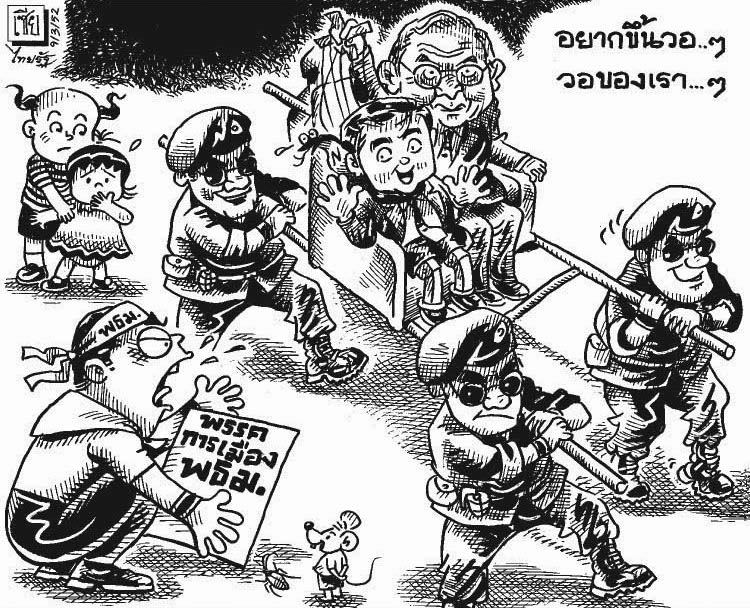 More than a decade ago, veteran political cartoonist Sakda Saeeow was accused of lèse-majesté and subjected to a three-year police investigation, after one of his cartoons was misinterpreted. The case—which has not been fully disclosed until now—stemmed from a newspaper cartoon published in Thai Rath (ไทยรัฐ) on 9th March 2009, showing Prime Minister Abhisit Vejjajiva as a puppet of his deputy, Suthep Thaugsuban. (Suthep was known to be the Democrat Party’s fixer, pulling the strings behind the scenes.)

The butt of the joke was Sondhi Limthongkul, portrayed as a toad complaining that he had been sidelined despite his PAD protests paving the way for Abhisit’s premiership. (This is a reference to the Thai idiom ‘คางคกขึ้นวอ’, literally ‘a toad carried on a palanquin’: rising above one’s station.) But it was the drawing of Suthep that caused the controversy. A reader reported the cartoon to the police, alleging that Suthep’s face resembled that of King Rama IX. As Sakda explained today, he was falsely accused of depicting “ในหลวงชักใยอภิสิทธิ์” (‘the King manipulating Abhisit’).

Under Thai law, defamantion is a criminal offence, and lèse-majesté (royal defamation) charges can be filed by anyone. The police examined all of Sakda’s work published six months before and six months after the cartoon in question. (He often caricatured Abhisit as a puppet, usually controlled by an unseen figure.) The political editors of four newspapers were also called to give evidence, and they all confirmed that the cartoon depicted Suthep, not Rama IX.

Even benign illustrations of King Rama IX were considered taboo, to the extent that children’s picture books—such as The Story of Tongdaeng (เรื่อง ทองแดง)—showed him only in silhouette. Somewhat trepidatiously, Stéphane Peray (known as Stephff) drew a respectful cartoon of the King ascending to heaven, published in The Nation newspaper to commemorate his death (reproduced in Red Lines). A hundred years ago, the political climate was very different: เกราะเหล็ก (‘armour’) printed a highly unflattering front-page caricature of Rama VI by cartoonist Sem Sumanan on 22nd November 1925 (reprinted in Woman, Man, Bangkok), and the newspaper was closed down—though it was back on sale six weeks later. 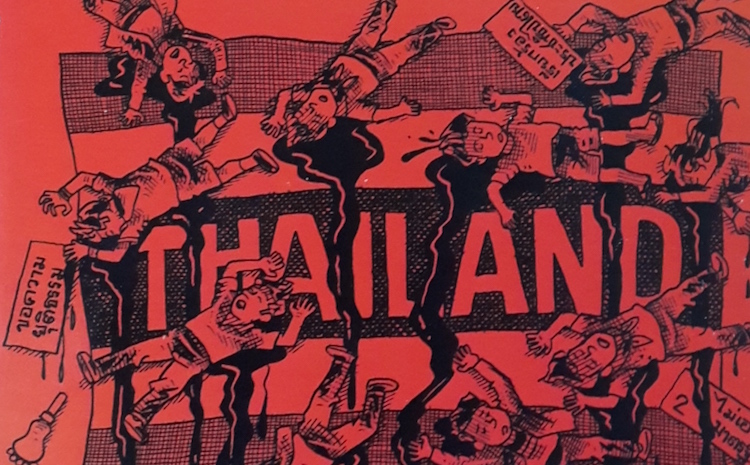 Sakda’s cartoon was reprinted in บันทึกการเมืองด้วยเส้นสายลายการ์ตูน 3 (‘a cartoon record of politics’), the third volume of his political cartoon anthologies, though its notoriety has not been revealed until now. (The book also includes cartoons mourning the victims of the 2010 military crackdown and, as the months go by, Abhisit’s caricature bears an increasing resemblance to Hitler.) In a more famous instance of state censorship, Sakda (who uses the pen name Sia) was summonsed by the NCPO junta on 4th October 2015, the day after Thai Rath published his cartoon mocking Prayut Chan-o-cha’s speech at the UN General Assembly.
Categories: censorship, media, politics
continued...