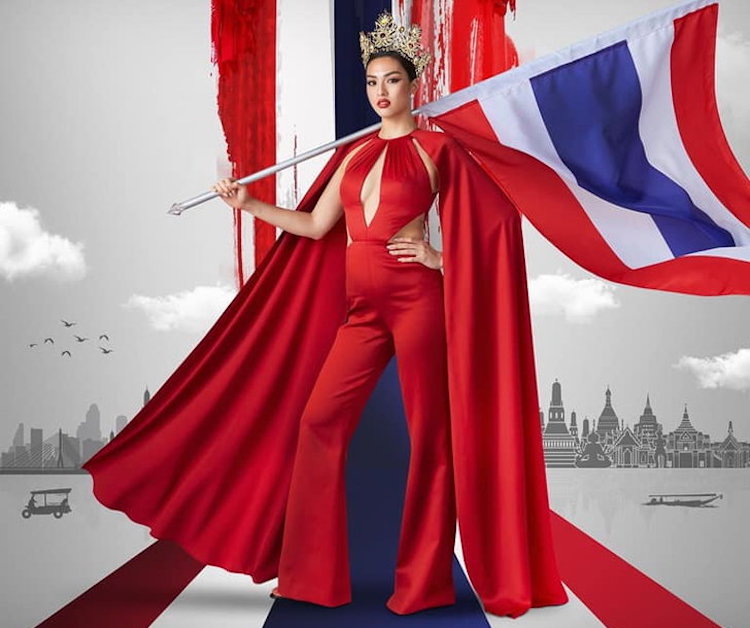 Anchalee Scott-Kemmis, the winner of Miss Thailand Universe 2021, is facing criminal charges after a complaint against her was filed with the Metropolitan Police in Bangkok today. An online image featuring Anchalee is alleged to have violated the Flag Act, according to the ultra-royalist MP Sonthiya Sawasdee.

The image, showing Anchalee standing on the blue section of the Thai flag design, was posted on the Miss Thailand Universe social media accounts (and has since been deleted). Sonthiya claims that, by appearing to stand on the flag, Anchalee is guilty of “placing the flag, the replica of the flag or the colour bands of the flags at an inappropriate place or in an inappropriate manner”, which is prohibited by the Flag Act.

Violation of the Flag Act carries a penalty of up to six months in prison, though Sonthiya has also accused Anchalee of breaking article 118 of the Thai criminal code. This criminalises “making any act to the flag or any other emblem to be symbolized the State with the intention to deride the Nation” [sic], and carries a more severe jail sentence of up to two years.

The image in question also shows Anchalee holding a large Thai flag, and Sonthiya has completely mischaracterised this patriotic portrait. Also, Sonthiya seemingly fails to recognise that this is a composite image, and that Anchalee did not physically step on a Thai flag. Sonthiya is a member of the governing Palang Pracharath Party, which is essentially the political wing of the military junta. Earlier this year, two art students were accused of violating the Flag Act by another self-appointed moral guardian.
Categories: censorship, media, politics
Dateline Bangkok