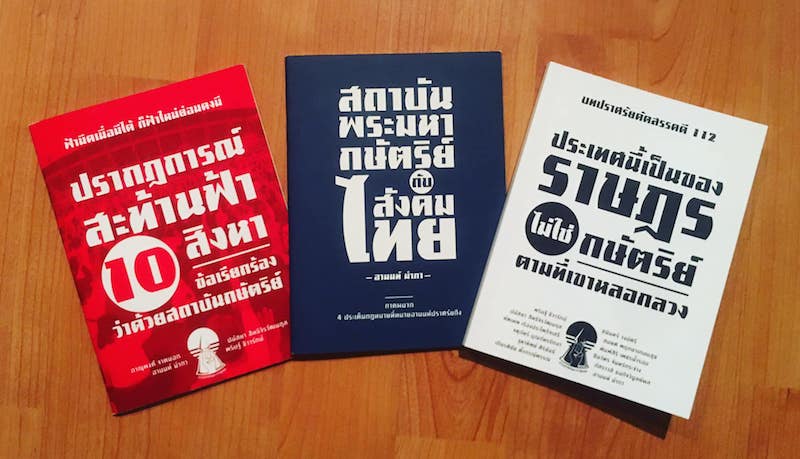 The United Front of Thammasat and Demonstration (UFTD), one of the key student groups leading the current anti-government protests, has released a new booklet, บทปราศรัยคัดสรรคดี 112 (‘speeches on 112’). It features a collection of speeches delivered at past protest rallies, all in support of the UFTD’s campaign to abolish the lèse-majesté law (article 112 of the Thai criminal code). The booklet’s main title is a quote from the 1932 revolutionary manifesto by Pridi Banomyong, ประเทศนี้เป็นของราษฎร ไม่ใช่กษัตริย์ตามที่เขาหลอกลวง (‘our country belongs to the people—not to the king, as has been deceitfully claimed’).

Naturally, in today’s political climate, publishing such a booklet is legally perilous. Copies were given away at Three Kings Monument Square in Chiang Mai on 21st September, and yesterday the UFTD announced online that they planned to distribute it at a rally outside BACC in Bangkok today. This announcement caught the attention of the police, who intercepted some copies that were en route to the rally today. Nevertheless, the booklet was available at the rally, and was handed out in exchange for a token donation.

This is the third booklet on the monarchy to attract unwanted attention from the police. 10,000 copies of Arnon Nampa’s สถาบันพระมหากษัตริย์กับสังคมไทย (‘the monarchy and Thai society’) were seized in March, and 50,000 copies of the UFTD’s ปรากฏการณ์สะท้านฟ้า 10 สิงหา (‘an earth-shattering event on 10th August’) were confiscated before they could be distributed at a rally in September 2020. (Arnon’s booklet was later given away at a rally at Ratchaprasong in Bangkok on 3rd September.)

Of course, by announcing their intention to distribute these booklets, the protest groups are essentially daring the police to ban them, and the censorious authorities are only too happy to oblige. Aside from their provocative contents and their brushes with the law, the three booklets also have a common colour scheme: Arnon’s has a blue cover, the first UFTD booklet is red, and the new one is white. These correspond with the colours of Thailand’s tricolour flag, symbolising the monarchy, the nation, and religion respectively.
Categories: books, censorship, politics
continued...