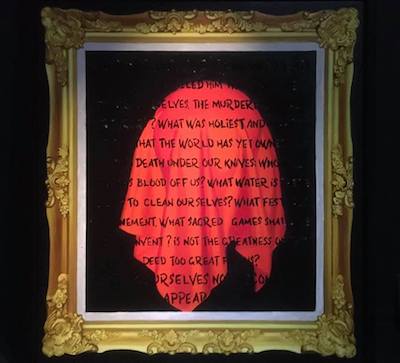 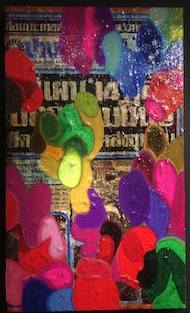 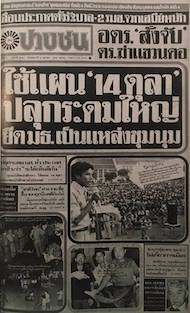 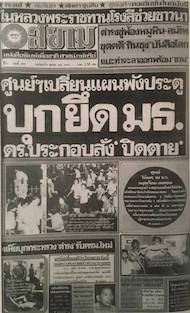 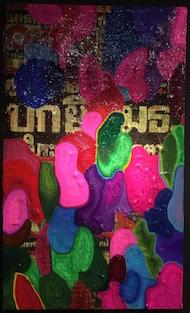 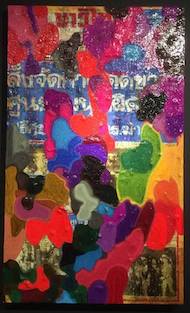 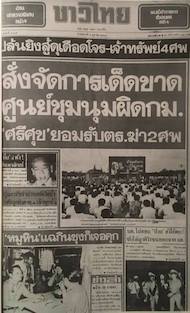 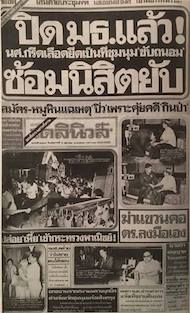 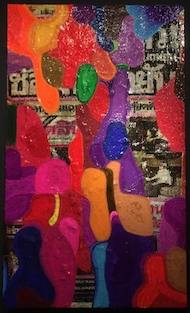 The group exhibition Dismantle (ปลด) opened yesterday at Joyman Gallery in Bangkok. It will run until 22nd August, although access will be limited as the city entered another lockdown today, due to the coronavirus pandemic.

Each of the works on display makes a strong political statement, though the most provocative are Kespada Moonsuwan’s oil painting God Is Dead (a head shrouded in red silk) and Narath Boriboonhiranthana’s holographic video projection I Will Wear Red at Your Funeral (a woman dancing in front of an upturned urn; ฉันหวังให้คุณตายและฉันจะใส่ชุดสีแดงในงานศพของคุณ). Both works refer to the same person, who is, of course, not mentioned by name.

The gallery is dimly lit, and the walls are painted black, making the black labels accompanying each exhibit almost illegible. This is presumably intentional, as the explanatory texts are sometimes incendiary. In his artist’s statement, Kesapada says: “I WOULD LIKE TO SEE THE RUMOR TURNING TO THE REAL STORY” [sic], a reference to a recent viral rumour. In her statement, Narath is equally blunt: “I HOPE YOU DIE, AND I AM GOING TO WEAR A RED DRESS IN YOUR FUNERAL” [sic].

Thasnai Sethaseree, a lecturer at Chiang Mai University who publicly defended two students after they created a banner representing the Thai flag, has produced a series of four painted collages for the exhibition. Each painting reproduces the front page of a Thai newspaper dated 5th October 1976, the day before the 6th October massacre. Thasnai has covered the headlines in bright colours and given them optimistic titles taken from vintage pop songs, to show how the news coverage of the period ignored the impending political crisis.

The four collages are: Have You Ever Seen the Rain, based on the front page of Daily News (เดลินิวส์); Who Will Stop the Rain, based on เสียง ปวงชน (‘the people’s voice’); What a Wonderful World, based on Dao Siam (ดาวสยาม); and The Sound of Silence, based on ชาวไทย (‘people of Thailand’). Other Thai newspaper front pages from October 1976 are reprinted in Prism of Photography (ปริซึมของภาพถ่าย).
Categories: art, politics
Dateline Bangkok