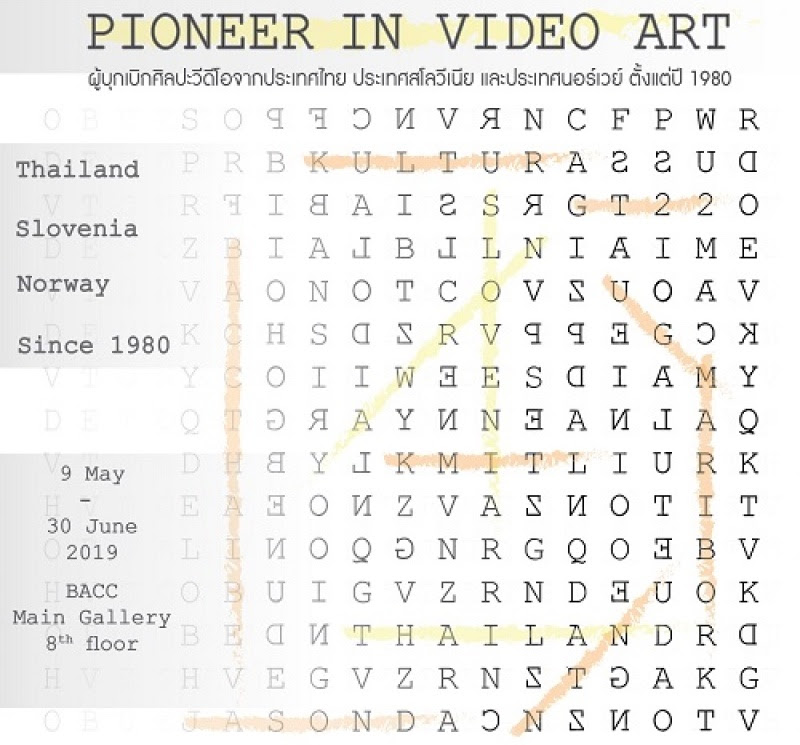 The Pioneer in Video Art [sic] (นิทรรศการผู้บุกเบิกศิลปะวีดีโอจากประเทศไทย ประเทศสโลวีเนีย และประเทศนอร์เวย์ ตั้งแต่ปี 1980) exhibition at BACC in Bangkok features video art from Thailand, Slovenia, and Norway. The exhibition's subtitle is Thailand, Slovenia, Norway Since 1980, though that date appears arbitrary, as a few pre-1980 videos are included and most works are post-2000.

One of the highlights is Arnont Nongyao's Ghost Rabbit and the Casket Sales (กระต่ายผี กับ คนขายโลง), in which a DJ samples the Thai junta's propaganda song Returning Happiness to the Thai Kingdom (คืนความสุขให้ประเทศไทย). Like the lead character in Baby Driver, the DJ remixes snippets of audio with a cassette recorder. Wheels with abstract patterns are shown spinning, symbolising vinyl records and evoking Marcel Duchamp's Dada film Anaemic Cinema. The film ends with a tattered Thai flag, as in the poster for Ing Kanjanavanit's Citizen Juling (พลเมืองจูหลิง).

Several major Thai video artists are missing from the exhibition, most notably Apichatpong Weerasethakul. (He was also omitted from an earlier survey of Thai video art, From Message to Media.) Araya Rasdjarmrearnsook is included, however, represented by A Walk, a slow-motion video in which she wanders among shrouded corpses in a morgue.

Pioneer in Video Art opened yesterday, though half of the exhibition was still under wraps on the first day. As of today, all works are now on show, though the signage is still being put up. The exhibition closes on 29th June.
Tags: art
continued...