From Message To Media 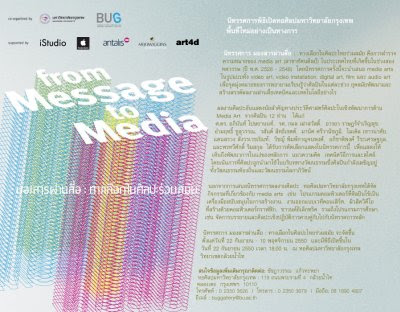 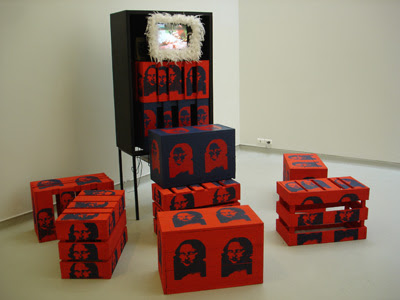 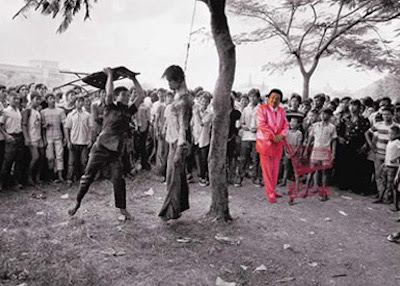 From Message To Media is a retrospective survey of Thai new-media art 1985-2005, at Bangkok University Gallery from 22nd September until 10th November. (The title inverts Marshall McLuhan's dictum "the medium is the message".)

The exhibition, part of the Bangkok Design Festival, features video art and digital photography by ten artists. (Eleven were originally planned, though for some reason acclaimed director Apichatpong Weerasethakul was unfortunately omitted at the last minute.)

Apinan Poshyananda's video installation How To Explain Art To A Bangkok Cock (1985) features footage of the artist interpreting Leonardo da Vinci's Mona Lisa for a group of chickens. He was presumably inspired by Joseph Beuys's performance How To Explain Pictures To A Dead Hare - the difference being that Apinan's chickens were all alive. Apinan also printed photocopies of Leonardo's painting onto crates, so that they resembled Andy Warhol's Brillo boxes. (He has also silkscreened the same image, titled Metamorphosis Of Mona, in a further Warhol parallel.) He cites Walter Benjamin's fascinating essay The Work Of Art In The Age Of Mechanical Reproduction as a key influence, and he is one one of the most interesting of the many artists inspired by Benjamin.

Several videos by Vasan Sitthiket are included, such as There Must Be Something Happen [sic] (1993), in which he was filmed while urinating and excreting (similar in content, if not in style, to the Aktionist films by Kurt Kren, such as The Eating Drinking Shitting Pissing Film). Vasan's other videos are I Manning Myself Around (the artist's fruitless attempts to grab some money dangling in front of him), Top Boot On My Head (performing everyday tasks with a boot balanced on his head), Goodbye Thailand (in which he pretends to kidnap himself at gunpoint), and How To Make A Good Art For Get Win Award [sic] (in which he presents a lecture on art to an empty classroom).

Araya Rasdjarmrearnsook is represented by her video Reading For Female Corpse (2001). [Confusingly, I saw a different Araya video two years ago which had the same title and date.] Araya can be seen reading aloud to a woman's corpse which is positioned in a coffin-like glass box.

Manit Sriwanichpoom's trademark 'Pink Man', a man in a bright pink suit pushing a shopping trolley incongruously inserted into photographs, is seen here as a spectator at the public lynchings of Thai pro-democracy protesters in 1976. The images (Horror In Pink) are extremely powerful, especially Horror In Pink I, in which a hanged man is about to be savagely beaten with a chair. Manit created the series after Samak Sundaravej was elected governor of Bangkok in 2000: the works were intended to remind the city's electorate of Samak's notorious role as an agitator prior to the 6th October 1976 massacre.
Categories: art exhibitions, censorship, Thailand, Vasan Sitthiket
continued...