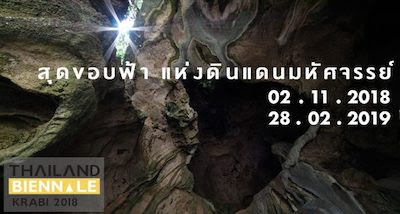 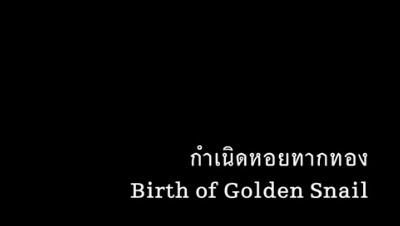 When will Chulayarnnon Siriphol's short film Birth of Golden Snail (กำเนิดหอยทากทอง) emerge from its shell? The film has been in limbo for the past seven weeks, and is effectively banned from the Thailand Biennale in Krabi.

Birth of Golden Snail was inspired by the history and myths associated with Krabi's Khao Khanabnam cave, and was intended as a site-specific installation to be projected in 35mm directly onto the cave wall. It presents fragments of the area's past, including its status as a camp for Japanese soldiers during World War II. The twenty-minute film was made in black-and-white, and shot on 16mm.

Chulayarnnon also explored the legacies of specific locations in two previous short films: A Brief History of Memory (ประวัติศาสตร์ขนาดย่อของความทรงจำ) examines UDD violence in Bangkok's Nang Loeng community, and Planking refers to the 6th October 1976 massacre on Thammasat University's football pitch. (He is also one of a quartet of directors responsible for the superb Ten Years Thailand.)

At a preview screening of Birth of Golden Snail on 17th October, the Office of Contemporary Art and Culture (OCAC) raised several objections, claiming that the portrayal of a pregnant schoolgirl set a bad example, and that a shot of her topless was indecent. As Chulayarnnon told me in an interview last week, the OCAC were also concerned that the representation of Japanese soldiers "can make a bad relationship between Thailand and Japan." What's more, a resident of Krabi even posted a death threat on Facebook, accusing the director of disrespecting local culture.

The OCAC asked Chulayarnnon to cut the film, though he declined to do so, as he explained in a Facebook post: "the committee asked me to re-edit and cut some scenes out from the film because they were afraid of negative feedback from local people in Krabi. I understood the comments from the committee but I refused to censor my film". On 1st November, only a day before the Biennale opened, the OCAC wrote to the director confirming that the film could not be shown without cuts.

After this legally questionable verdict, the film was excluded from the Biennale, and Chulayarnnon's negotiations with the OCAC have since been moving at a snail's pace. As he said in last week's interview, he is defending freedom of expression and setting a precedent: "I use this film as a case study, to understand and question the system. I don't fight for myself, but I fight for the next film, the next project in the future." The Biennale runs until 28th February next year, though it remains to be seen whether Birth of Golden Snail will be aborted or not.
Tags: art, censorship
continued...