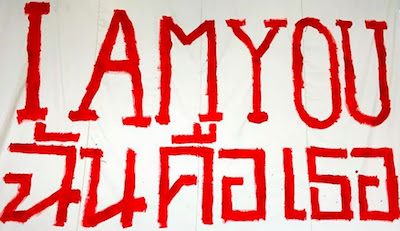 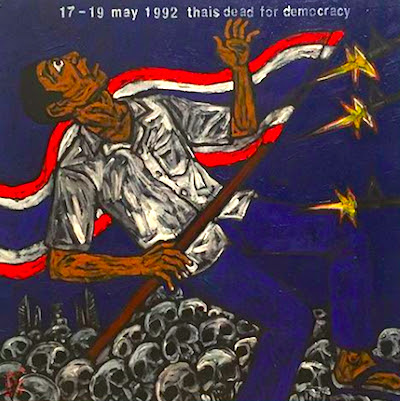 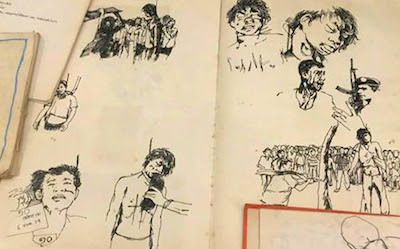 I Am You (ฉันคือเธอ), featuring artworks spanning Vasan Sitthiket's entire career, opened yesterday at BACC in Bangkok. The retrospective includes paintings, woodcut prints, large-scale installations, and a handful of videos (including There Must Be Something Happen). Some of his sketchbooks are also on show, and they include preparatory sketches for Blue October (ตุลาลัย) from 1978.

In Thailand, discussion of sensitive subjects is usually camouflaged by innuendo, and criticisms are made indirectly, to save face. Vasan, however, pulls no punches. Unusually for an established Thai artist, he is refreshingly blunt in his treatment of politics, sex, and religion. Hypocrisy and Ten Evil Scenes of Thai Politic [sic], for example, portray politicians as corrupt figures succumbing to the sins of lust and greed. In his frequent self-portraits (such as The Human Clay) he is not only nude but also tumescent. Vasan's depiction of monks has also caused controversy: Buddha Returns to Bangkok (พระพุทธเจ้าเสด็จกรุงเทพ 2535) depicted a monk raping a woman, and Obsessive Compulsive included paintings of monks having sex.

I Am You is a major retrospective, with more than 100 artworks, including Death for Democracy 1992 (ตายเพื่อประชาธิปไตย 2535), though Vasan's more controversial pieces are notable by their absence. The bilingual exhibition catalogue, which includes an essay by Iola Lenzi, is accompanied by The Literature Collection of Vasan Sitthiket (รวมวรรณกรรมคัดสรร), a book of Vasan's writings. The exhibition closes on 27th May.
Categories: art exhibitions, Thailand, Vasan Sitthiket
continued...