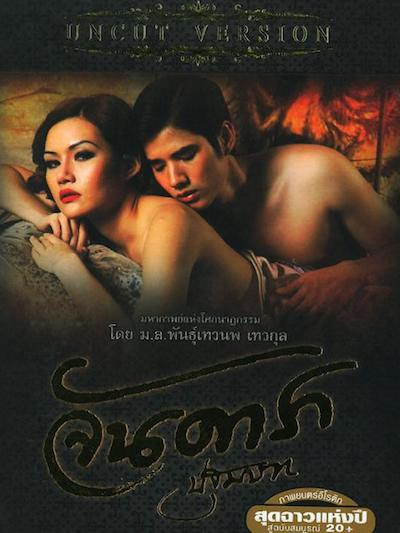 Jan Dara: The Beginning (จัน ดารา ปฐมบท), directed by Pundhevanop Dhewakul, is a prequel to Nonzee Nimibutr's original Jan Dara (จัน ดารา). It stars Mario Maurer, who later starred in Pundhevanop's At the Gate of the Ghost (อุโมงค์ผาเมือง). (Both films demonstrate why Mario, a former model, is more famous for his looks than his acting skills.)

For its theatrical release in 2012, Jan Dara: The Beginning was cut to obtain an '18' rating, though a Thai senator started a brief moral panic by complaining that it was still too sexually explicit. (The film has plenty of topless nudity, which is rare in mainstream Thai cinema.) The Ministry of Culture responded by requiring cinemas to check audience-members' ID cards at the box office.

According to the Film and Video Act, age verification is only required for films rated '20', while the lower ratings ('13,' '15', and '18') are purely advisory. The exceptional (and illegal) ID-check was not widely enforced by cinemas, and the film had already been playing for a fortnight before the policy was confirmed. The DVD is uncut (almost half an hour longer), and rated '20'.
Categories: censorship, films
continued...