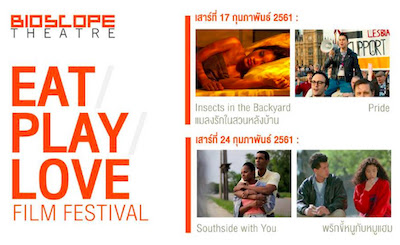 Tanwarin Sukkhapisit's Insects in the Backyard (อินเซค อินเดอะ แบ็คยาร์ด) will be shown tomorrow as the opening film of the Eat Play Love Film Festival. The event, organised by Bioscope magazine, will close a week later.

Appropriately, the screenings will be at ChangChui in Bangkok, where a restaurant also called Insects in the Backyard opened last year. (It's more than just a name, as the restaurant specialises in fried insects. They also have a take-away service: giant water beetles preserved in jars of olive oil.)

Insects in the Backyard premiered at the World Film Festival of Bangkok in 2010, and was promptly banned. It was eventually released, with a single cut, late last year, and will be shown at the Thai Film Archive on 24th February.
Categories: films
continued...