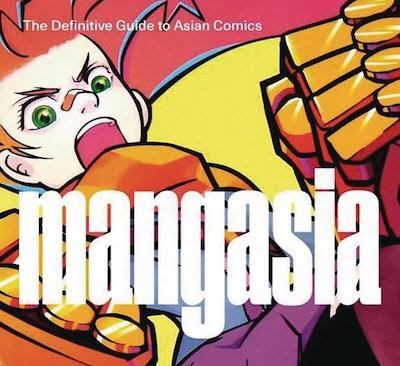 Mangasia: The Definitive Guide to Asian Comics, a survey of comics from across Asia by Paul Gravett, will be published next week by Thames & Hudson. Japanese manga inevitably dominates, though there is also ample coverage of China, Hong Kong, India, South Korea, and the Philippines. Thailand, Singapore, Taiwan, and other Asian countries are also represented, to a lesser extent. As Gravett writes, "In terms of the development of comics in Asia, manga is dominant, both in terms of its cultural influence and its extraordinary sales figures." (Chinese manhua and Korean manhwa, for example, are direct descendants of Japanese manga.)

Unfortunately, Mangasia has no bibliography. Manga! Manga!, by Frederik L. Schodt, was the first English-language book on Japanese comics. Manga Design (revised as 100 Manga Artists), by Amano Masanao and Julius Wiedemann, profiles the most significant mangaka (manga artists). Comics: A Global History, by Dan Mazur and Alexander Danner, is an international history of comics from 1968 onwards. The World Encyclopedia of Comics, by Maurice Horn, features biographies of hundreds of comic artists. Comics, Comix, and Graphic Novels, by Roger Sabin, is an introduction to the entire field of comic art.
Categories: art, books, media
continued...