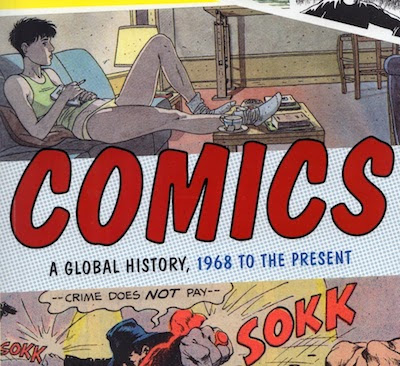 Comics: A Global History, 1968 To The Present (by Dan Mazur and Alexander Danner) is one of the few books to offer an international history of comic art. Most surveys have focused exclusively on either American comics or Japanese manga, though Comics: A Global History covers the US, Japan, and Europe. So, while it's not quite global in scope, it's more inclusive than previous books on the subject.

The authors begin their history in 1968, which they describe as "a watershed year in which a number of comics creators in Japan, America and Europe began to aggressively demonstrate that comics could be more than an ephemeral vehicle for children's entertainment". (That year marked the birth of the alternative comix movement.) The introduction summarises 1950s and 1960s comic history, a useful extension of the book's chronology.

The key artists and comics of the post-war era (Robert Crumb's Zap, Alan Moore's Watchmen, "God of Manga" Osamu Tezuka) are all included, as are the major international forms of comic art ("bande dessinee, manga, fumetti, tebeos, historietas, komiks") and their more literary sub-genres ("fumetti d'autore" and "bande dessinee romanesque"). Various manga formats and styles ("gekiga", "akahon", "kashihon", "shojo", "shonen", "seinen", "josei", and "watakushi") are explored, though the classifications are a little bewildering, as the authors recognise: "Categories diversified... The distinctions were blurry at times, and the terminology was fluid."

Aside from the major comic markets, the book also finds space for some less familiar territories, such as a brief history and taxonomy of South Korean "manhwa" (sub-divided into "ddakji", "sun-jung", and "myongnang"). Roger Sabin's Comics, Comix, & Graphic Novels and Maurice Horn's World Encyclopedia Of Comics (both of which cover the entire history of comics) are still essential reading, though Comics: A Global History is a unique international study of modern comics.
Categories: book reviews
continued...