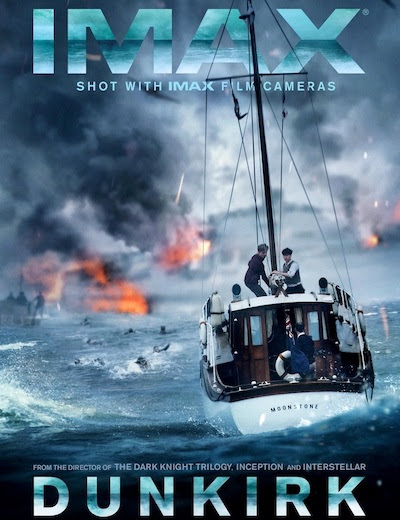 When he interviewed Quentin Tarantino for the Directors Guild of America in 2015, Christopher Nolan's first question was related to the 65mm film format: "My feeling, watching this film, is that it had an increased level of formalism, I suppose you'd say. There's a real calm and thought to where the camera is, always. Do you think that was related in any way to the choice of format?"

Nolan was referring to Tarantino's The Hateful Eight, though the question also applies to his own latest film, Dunkirk, which was filmed in 70mm IMAX and 65mm. The precise compositions of Dunkirk are a reminder of the formalism that Nolan saw in Tarantino's earlier film.

The Spitfires flying in formation, and the soldiers queuing on the pristine Dunkerque beach, add to the sense of precision in Dunkirk. This seems incongruous given the film's subject matter, though it's perhaps better to think of it as a film about a military operation rather than a war film per se. Regardless, the resulting cinematography is spectacular, especially the breathtaking shots of a gliding Spitfire.

The film is a departure for Nolan, as it's based on real historical events, though it shares some of the narrative experimentation familiar from Memento and Inception. Dunkirk's three story arcs (land, sea, and air) take place over different time periods (a week, a day, and an hour, respectively), a condensed form of the time dilation in Nolan's Interstellar.

Dunkirk also benefits from Nolan's long-standing preference for in-camera effects over CGI, with filming taking place on real ships, boats, and aeroplanes. Nolan has cited masters of suspense Alfred Hitchcock and Henri-Georges Clouzot as primary inspirations for Dunkirk, and there are obvious parallels, for example, with Hitchcock's Lifeboat.

Dunkirk is showing in IMAX 70mm in the 1.43:1 aspect ratio, and this format provides the highest possible image quality. At digital IMAX cinemas, with smaller screens, the film is cropped to 1.9:1. 70mm prints at non-IMAX cinemas are cropped to 2.2:1. 35mm, DMX, and standard DCP versions are cropped to 2.4:1. The Krungsri IMAX screen at Bangkok's Siam Paragon is the only IMAX 70mm venue in Thailand.
Categories: films
continued...