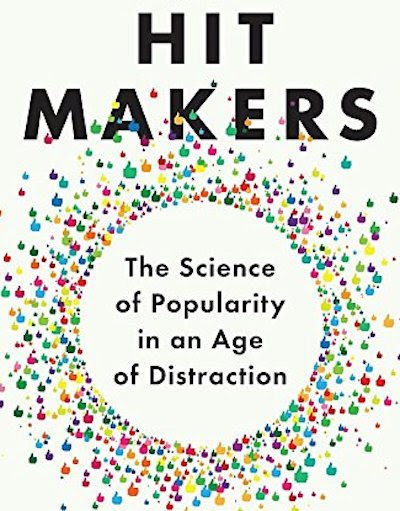 Hit Makers, by Derek Thompson, is a study of how blockbusters and bestsellers are born. (Its focus is squarely on the head of the sales curve, rather than the long tail.) There is, of course, no magic formula to explain commercial success, though Thompson identifies some of the key factors, such as the 'aesthetic aha' principle: "The best hit makers are gifted at creating moments of meaning by marrying new and old, anxiety and understanding. They are architects of familiar surprises."

The book's most significant contribution is its refutation of the myth that cultural memes 'go viral'. Drawing on a research paper from 2012 (The Structure Of Online Diffusion Networks), Thompson argues that viral hits rely on mass dissemination in addition to word-of-mouth: "For most so-called viral ideas or products to become massive hits, they almost always depend on several moments where they spread to many, many people from one source." Metaphorically, viral content is propagated via water pumps (broadcasting to a wide audience) rather than water coolers (conversations between individuals).

Hit Makers is subtitled The Science Of Popularity In An Age Of Distraction. In the UK, the subtitle was simplified to How Things Become Popular. Thompson's articles for The Atlantic magazine include early examinations of online clickbait, which he defines in Hit Makers: "An article is considered clickbait if the headline gets the reader to click on a story that doesn't live up to its promise."
Tags: books, media
continued...