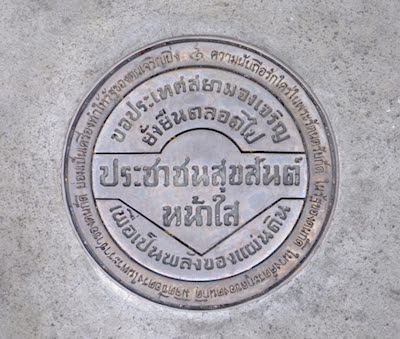 A commemorative plaque has been removed from its position in Bangkok's Royal Plaza. The brass plaque commemorated Thailand's transition from absolute to constitutional monarchy in 1932, and was a symbol of Thailand's democratic revolution. It has now been replaced by a new plaque with an inscription promoting prosperity and happiness.

The original plaque was installed in 1936, next to a statue of King Rama V. Apart from a hiatus from 1960 to 1963, it had remained in place until approximately one month ago, when it was removed by persons unknown. The plaque's current whereabouts, and the reason for its replacement, have not been revealed. According to the Bangkok Metropolitan Authority, the CCTV cameras in the area were not operational when the plaque was removed.

Early last month, the plaque's removal generated plenty of critical comments on social media. However, that debate has since died down, as the military government has discouraged any commentary on the issue. A panel discussion on the subject, which had been due to take place at the Foreign Correspondents' Club of Thailand last night, was cancelled by the police.

Even a month after the replacement, a policeman still stands guard near the new plaque, to prevent photography, as I discovered today. The police officer was friendly, yet insistent: "You can delete? Delete. Delete. Delete! Delete the picture! OK, you delete."