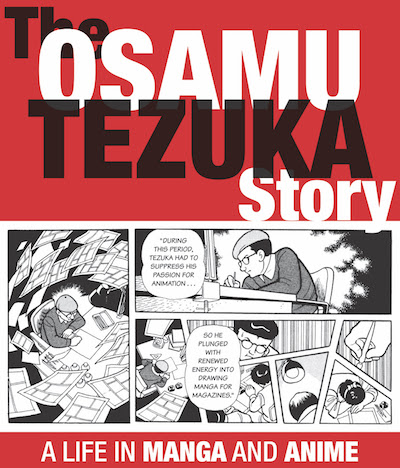 The Osamu Tezuka Story, by Toshio Ban, was originally published in Japanese (手塚治虫物語) from 1989 to 1992 as a weekly serial in Asahi Shimbun magazine. Last year, it was translated into English for the first time, by Frederik L Schodt, who introduced manga to Western readers with his excellent Manga! Manga! and wrote the introduction to Manga Kamishibai. (Schodt's The Astro Boy Essays and Helen McCarthy's The Art Of Osamu Tezuka are among the few English-language surveys of Tezuka's life and work.)

As Schodt explains in his introduction, "Tezuka was the main force in the creation of the long-arc, story manga format... and in 1963, by animating his own Astro Boy manga for television, he also created the framework for Japan's entire modern manga-anime". He also notes that, in Japan, Tezuka is known as "manga no kami-sama" ("God of Manga"). In Cartoons, Giannalberto Bendazzi calls Tezuka "the 'God of comic-strips'." In The World Encyclopedia Of Comics, Maurice Horn calls him the "King of Japanese Comics".

At more than 900 pages, The Osamu Tezuka Story is a comprehensive biography of Tezuka in manga form. One of Tezuka's recurring characters, the mustachioed Higeoyaji, appears as a narrator. Interestingly, excerpts from Stanley Kubrick's 1965 letter to Tezuka are included, translated from Tezuka's autobiography, Baku Wa Mangaka. There is an invaluable appendix listing the Japanese titles of Tezuka's manga and anime works.

Schodt writes that, although the book "could have turned out to be a crude hagiography - a biography depicting Tezuka in only a heroic light", it offers instead "a realistic portrait of a very complex and unique individual." However, because it's an official Tezuka Productions release, created as a posthumous tribute to Tezuka, an element of hagiography is unavoidable.

The translation of The Osamu Tezuka Story (unlike the Astro Boy Omnibus series, Schodt's translation of Tezuka's Mighty Atom) preserves the original Japanese format, without the Westernised 'flopping' (left-to-right conversion) of some manga translations: "Pages and panels are read in Japanese order from right-to-left, but text in word balloons is read from left-to-right. And "sound effects," especially when part of the original art work, are often left as-is, with unobtrusive translations."
Categories: books
continued...