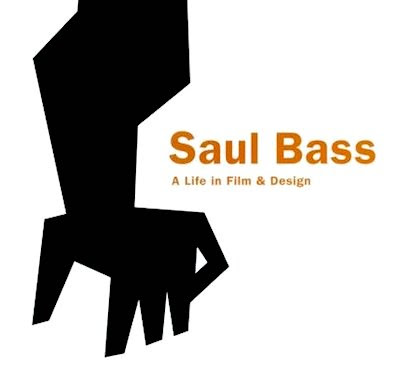 Saul Bass: A Life In Film & Design, the first book devoted to the work of Saul Bass, is a comprehensive monograph on one of the greatest graphic designers of the past century. Alongside Paul Rand, Bass reinvented American corporate branding, though he is best remembered for his groundbreaking film title sequences: "With his work in titles, Saul would elevate the opening of Hollywood films to the status of an art form."

The title sequences and posters for Otto Preminger's The Man With The Golden Arm and Anatomy Of A Murder were revolutionary. For each film, Bass created a deceptively simple graphic silhouette: a hand and forearm for The Man With The Golden Arm, and the outline of a body for Anatomy Of A Murder. His poster and title sequence for Alfred Hitchcock's Vertigo maintained the concept of a single motif (in this case, a spiral), though Bass achieved a kaleidoscopic effect in the animated opening titles.

Bass also designed the title sequence for Hitchcock's Psycho, and he received an additional credit as 'pictorial consultant'. The extent of his contribution to the film has been in dispute ever since: Bass drew storyboards for the shower scene, and later claimed that he was largely responsible for filming the sequence, though Hitchcock's other collaborators have refuted this. (Bass's sketches are reproduced in The Art Of Movie Storyboards; for more discussion of his contribution, see Stephen Rebello's Alfred Hitchcock & The Making Of Psycho, Bill Krohn's Hitchcock At Work, and Psycho In The Shower.)

In the Bass/Hitchcock debate, the book sides squarely with Bass - "It is time for Saul's contribution to the shower scene to be acknowledged" - even suggesting that he had artistic control over the scene: "After the sequence was shot, Hitchcock insisted on two inserts... Trusting Hitchcock's vision Saul agreed." In a long footnote, the authors rightly criticise Hitchcock for downplaying Bass' contribution to the film, though they're less critical of Bass' ambiguous claims of creative input.

The book, written by Pat Kirkham and designed by Bass' daughter Jennifer, includes a preface by Martin Scorsese, who explains how Bass could "penetrate the heart of a movie and find its secret. That's what he did with Vertigo and those spirals that just keep endlessly forming - that's the madness at the heart of the picture, the beautiful nightmare vortex". Kirkham interviewed Bass for Sight & Sound magazine (February 1994) and wrote a thirty-page article on Bass and Hitchcock for the journal West 86th (Spring 2011); she also co-edited the magnificent History Of Design.
Categories: books
continued...