The Art Of Movie Storyboards 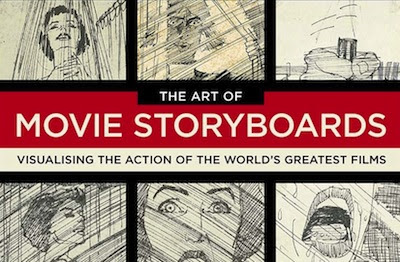 The Art Of Movie Storyboards: Visualising The Action Of The World's Greatest Films, by Fionnuala Halligan, is a collection of storyboard excerpts from around forty films. It was published in America as Movie Storyboards: The Art Of Visualizing Screenplays.
The book showcases the work of pre-visualisation artists in the film-production process. Some of the greatest production designers (such as Saul Bass and William Cameron Menzies) are included, and plenty of classic films (including Psycho, Gone With The Wind, The Big Sleep, Apocalypse Now, and Raging Bull) are represented.

Most of the storyboards were not produced by the directors themselves, though there are a few notable exceptions, including Martin Scorsese's drawings for Raging Bull and Akira Kurosawa's preparatory paintings for Ran. (There is some overlap with Karl French's book Art By Film Directors.) Scorsese's rough sketches and Kurosawa's exquisite artworks represent two opposite approaches to storyboarding, and Scorsese's is the more conventional method: storyboards are not generally intended as works of art, they function instead as blueprints for the director and cinematographer.

The book reproduces storyboard frames, though corresponding stills from the films themselves are not included, so there's no way of comparing them directly. Also, some of the films Halligan selects, especially those in the final chapter, are very far from classics.
Categories: book reviews
continued...