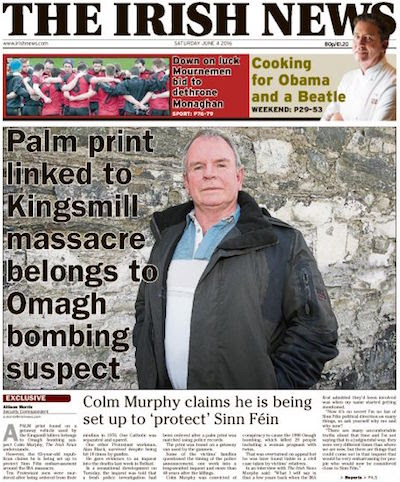 The head of the Police Service of Northern Ireland unsuccessfully attempted to prevent The Irish News from printing the name of a man suspected of involvement in the 1976 massacre at Kingsmill. Last Friday, the newspaper's website named the suspect as Colm Murphy, and revealed that his palm print had been found on the killers' getaway vehicle.

An inquest into the Kingsmill massacre has been opened, and the PSNI contacted the newspaper on Friday night, threatening it with a High Court injunction to prevent it from naming Murphy in the next day's print edition. There was an emergency session at the High Court after midnight on Saturday morning, though the case was adjourned.

By that time, the Saturday edition was already being printed, and the newspaper refused to stop the presses and remove Murphy's name. The front page featured a large photograph of Murphy, and he was named in a subheading ("Colm Murphy claims he is being set up to 'protect' Sinn Fein").
Tags: censorship, media
continued...