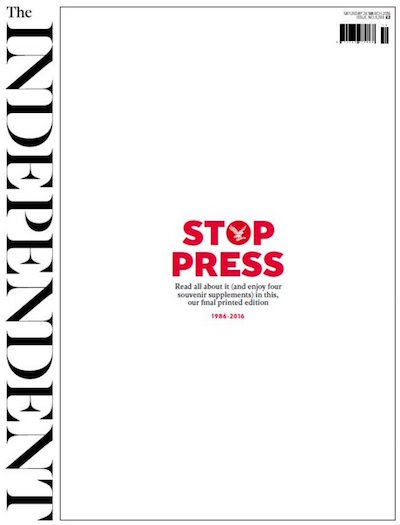 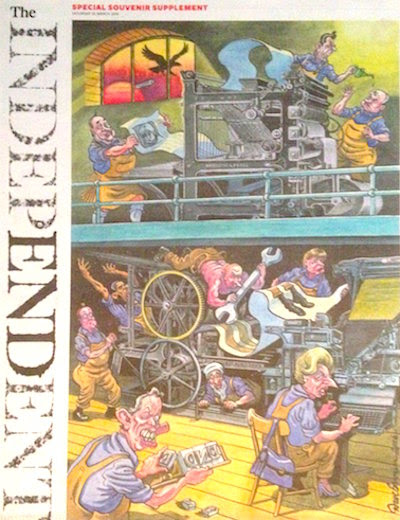 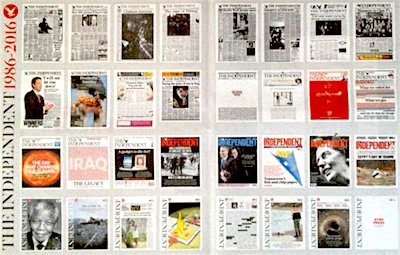 Today, The Independent published its final print edition, thirty years after it was launched in 1986. (Its sister paper, The Independent On Sunday, ceased publication last week.) UK newspapers are traditionally owned by press barons with political agendas, though The Independent was (as its editorial reminds us today on page two), "free from both proprietorial interference and party allegiance."

Today's final edition has a wrap-around cover with the headline "STOP PRESS" and a double-page spread of notable Independent front pages. It also includes a souvenir supplement featuring valedictory columns by former editors and correspondents. Founding editor Andreas Whittam Smith reflects on "this sad occasion, the publication of the last print edition of The Independent". Current editor Amol Rajan looks to the digital future: "when it comes to general interest, printed weekday news, in the long run we are all dead." (Editors of other newspapers, with more financial resources and higher circulations, might not necessarily agree.)

In 1992, The Independent's circulation briefly overtook that of The Times, and Times proprietor Rupert Murdoch launched a price war that spread to the tabloids. (Ironically, the price war's only casualty was Murdoch's own Today. The Independent survived, though its circulation declined.) It was sold in 2010 for the nominal sum of £1 to Russian oligarch Alexander Lebedev, who later launched the i. The i was so successful that, according to the latest ABC sales figures, its circulation is now five times higher than The Independent's.

The Independent was a truly innovative newspaper. It devoted more space to international news than the other broadsheet titles. It was the first national UK paper to appoint a female editor (Rosie Boycott, in 1998). Its radical decision to switch from broadsheet to tabloid size (publishing in both formats in 2003, and fully converting in 2004) prompted The Times and The Guardian to follow suit. It was arguably even more liberal than The Guardian, consistent in its lack of royal coverage and unequivocal in its opposition to the 2003 invasion of Iraq. It was also notable for its poster-style front pages dominated by full-page images, such as last year's tragic photograph of Alan Kurdi that other newspapers were not brave enough to print on page one.
Categories: media
continued...