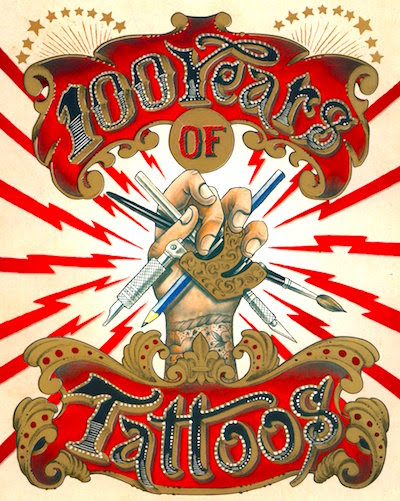 100 Years Of Tattoos, by David McComb (a former editor of Bizarre magazine) is a history of tattooing since World War I. The book, published by Laurence King, includes hundreds of vintage photographs of tattoos from various countries, principally Britain, America, and Japan.

McComb describes the link between tattoos and the armed forces: "From the beginning of World War I until the end of World War II, Western tattoos - which for centuries had been intrinsically linked with seafaring and the military - were largely regarded as a sign of patriotism or a symbol of freedom." In the inter-war years, tattoos were novelty attractions: "Heavily tattooed sideshow performers... helped to popularise body art in the early- to mid-twentieth century".

After World War II, tattoos became socially unacceptable: "The reputation of tattoos took a beating in the mid-1940s, when photographs from Nazi concentration camps... showed emaciated prisoners tattooed with crude identification numbers". They were also associated with criminals - "Today's most popular tattoo style, black and grey, was born in the US penal system" - and Hells Angels: "the confrontational ink won by outlaw bikers and urban gangs also helped law-abiding middle-class citizens regard tattoos as a mark of deviance."

A tattoo renaissance began in the 1970s in San Francisco: "tattoos were adopted by a variety of subcultures... to show mainstream society that ink was no longer the preserve of bikers and criminals." Charles Gatewood documented this tattoo subculture in books such as Forbidden Photographs (1981; reissued in 1995 with a graphic cover), and the Re/Search book Modern Primitives (1989) was the first comprehensive guide to contemporary body art. The term 'Tattoo Renaissance' was coined by Arnold Rubin in his book Marks Of Civilization (1988).

100 Years Of Tattoos does not include a bibliography. Wilfred Dyson Hambly's The History Of Tattooing (1925; reissued in 2009 with additional illustrations) was the first anthropological study of global tattoo practices. Karl Groning's Decorated Skin (1997) is a heavily illustrated guide to tribal body decoration. Maarten Hesselt van Dinter's The World Of Tattoo (2005) is the most comprehensive account of historical tattooing, and Tatouers, Tatoues (2014) was the first major exhibition devoted to the history of tattoos. (The exhibition catalogue, Tattoo, was edited by Anne and Julien.)
Categories: books
continued...