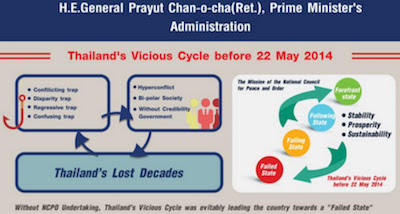 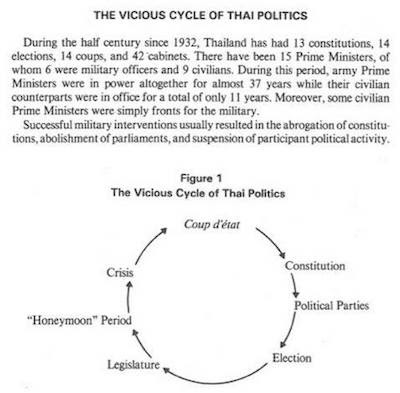 The NCPO has produced a wrap-around advertising supplement in today's Bangkok Post, setting out its plans for "the Hope, Happiness & Harmony of the people". The same supplement was included in The Nation on Tuesday.

Page one begins with an illustration of "Thailand's Vicious Cycle", claiming that the junta prevented Thailand from becoming a failed state. Chai-anan Samudavanija's book The Thai Young Turks (1982) included a very different model of Thailand's vicious cycle, which features a word entirely absent from the NCPO's supplement: 'coup'.

The supplement also includes a guide to the differences between "Pseudo-Democracy" and "Genuine Democracy", effectively a criticism of Thaksin Shinawatra and Pheu Thai's policies. To say the least, it's profoundly ironic that a military junta would presume to explain the concept of democracy.

Finally, a list of "11 Policies" features only three policies, ending with "access to gover" [sic] and two empty bullet points. The supplement folds out into a poster showing a hierarchical diagram of the NCPO's agenda, though it's so dense, and printed in such a tiny font size, that it's impenetrable.

The Bangkok Post's editor, Pichai Chuensuksawadi, has written a note in the newspaper about the NCPO supplement. He explains that its inclusion was a commercial decision: "The advertisement that wraps today's newspaper, placed by our advertising department, does not represent the Bangkok Post's editorial position."
Categories: media, politics
continued...