Wheel Of A Dark Soul 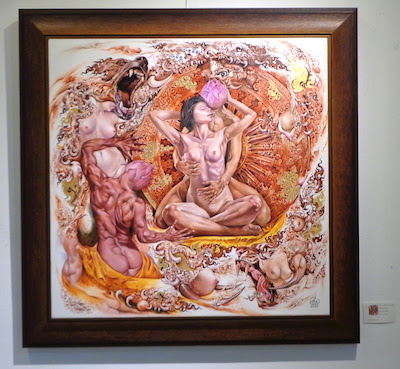 Nipon Jungkina's exhibition Wheel Of A Dark Soul opened at Jamjuree Art Gallery in Bangkok on Christmas Day last year, and will close tomorrow. The exhibition features paintings of monks with muscular torsos, wearing their saffron robes as loincloths. The monks' heads have been replaced by lotus buds, and they are surrounded by naked women.

One especially dramatic painting, Wheel Of A Dark Soul V, shows a monk and a woman embracing, with the woman's mouth resembling a bird's beak. The exhibition is a commentary on Buddhism and morality: the lotus buds symbolise the monks' inability to reach Nirvana as they succumb to sexual temptation.

Representation of monks is a sensitive subject in Thai art. Vasan Sitthiket's painting Buddha Returns To Bangkok (1992) depicted monks raping women, and his ตัวใครตัวมันนะโยม (2011) shows two monks fighting and having sex. Anupong Chantorn painted monks with beaks (Hope In The Dark, 2009), and his Moral Boundary (2010) depicts a monk with an erect phallus. Withit Sembutr's Doo Phra, a painting of monks crowding around an amulet-seller, was withdrawn from a 2007 exhibition.
Categories: art
continued...