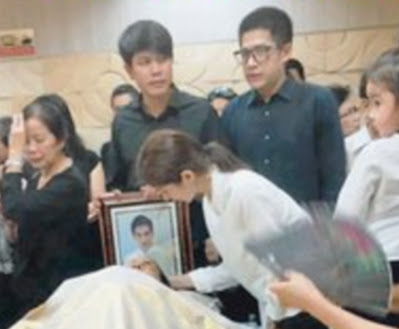 Popular Thai actor Tridsadee Sahawong died on Monday, after contracting dengue fever and spending several months in a coma. At his funeral, Thai paparazzi were criticised for intrusively crowding around his coffin, and the funeral was front-page news for every national newspaper yesterday.

However, only one newspaper, Thai Rath, published a photograph showing Tridsadee's face as he lay in his open casket. (The picture appeared yesterday on page one, below the fold.) On its website, Thai Rath blurred the photograph to obscure the dead actor's face, though the image in the printed newspaper was not blurred.

Thai Rath is Thailand's most popular newspaper, and has a tabloid reporting style despite its broadsheet size. It has a reputation for regularly printing (pixelated) images of car-crash victims on its front page, and notoriously it printed an alleged photograph of actor David Carradine's body at the scene of his death.
Categories: censorship, media
continued...