The World Of Tattoo 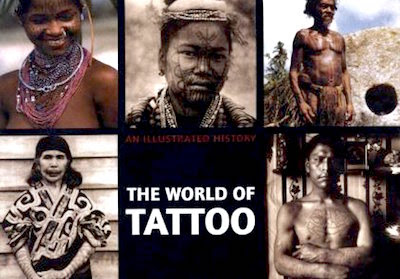 The World Of Tattoo, by Maarten Hesselt van Dinter, is an attempt to write a modern, illustrated equivalent to Wilfred Dyson Hambly's The History Of Tattooing (1925). The author praises Hambly's book for its "brief descriptions of all known tattooing cultures", though he also notes that it "contains little illustrative material to fire the reader's imagination." The World Of Tattoo is subtitled An Illustrated History, and the key word is 'Illustrated', as it contains many more photographs and drawings than Hambly's book.

Whereas Hambly focused on the magico-religious meanings of tattoos, The World Of Tattoo highlights variations in tattoo design. Also, of course, it contains more recent findings, such as the mummified body of the tattooed man known as Otzi. In his preface, the author claims that he gave up his job, his girlfriend, and half his furniture during the eight-year writing process; the result isn't quite the definitive tome that such sacrifices would suggest, though it is a comprehensive history of tattooing in every continent, with an extensive bibliography.
Tags: books
continued...