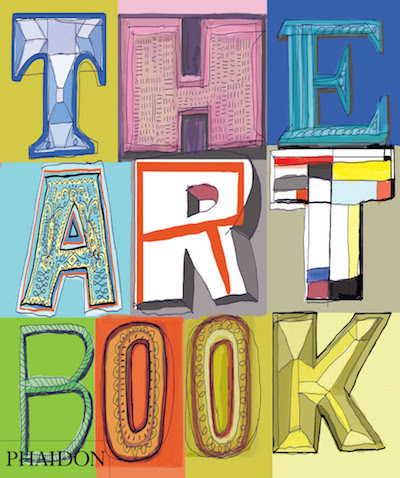 The Art Book is "an A-Z guide to the greatest painters, photographers and sculptors from medieval times to the present day." It was first published by Phaidon in 1994, and was followed by The 21st Century Art Book, The Photography Book, The Design Book, The Fashion Book, and The Pot Book, also from Phaidon. A second edition of The Art Book was published in 2012.

The book features over 500 artists, each represented by a large illustration of a single work. Some of the world's most iconic artworks are included: the Mona Lisa (Leonardo), Las Meninas (Velazquez), The Treachery Of Images (Magritte), and Fountain (Duchamp). Surprisingly, though, there are some notable omissions: Michelangelo is represented by his Pieta rather than David, an alternate Hokusai woodcut of Mount Fuji is included instead of The Great Wave, and Picasso's Les Demoiselles d'Avignon is omitted in favour of his Weeping Woman. In the Chinese-language edition, Ai Weiwei has been replaced by Agostino di Duccio.

Phaidon's Art In Time and The Art Museum are also profusely illustrated art histories. The Story Of Art, by EH Gombrich, is the most influential history of art. A World History Of Art, by John Fleming and Hugh Honour, is the most comprehensive single-volume survey available.
Tags: books
continued...