The Art & History Of Globes 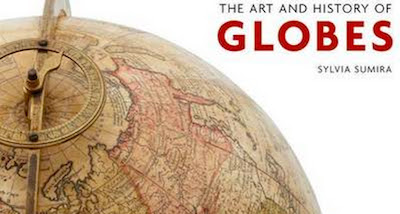 The Art & History of Globes, by Sylvia Sumira, features sixty examples of terrestrial and celestial globes, from the earliest extant terrestrial globe (1492) to the Victorian era, including several by the great cartographers Gerardus Mercator and Willem Blaeu (whose son published the Atlas Maior). Most of the globes illustrated are from the British Library, though almost a third are from other collections.

Sumira provides a concise history of globe production, but the cultural history of the globe is not explored. (Globes have been cultural signifiers of power for at least 500 years, as in the 'Armada portrait' of Elizabeth I, James Gillray's 1805 cartoon of Pitt and Napoleon, and Charlie Chaplin's inflatable globe in The Great Dictator.) The book was published in America under the alternative title Globes: 400 Years Of Exploration, Navigation, & Power.
Categories: books
continued...